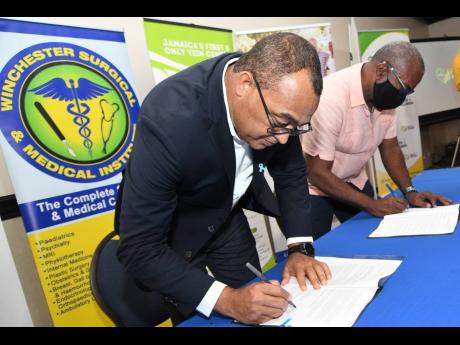 Rudolph Brown/Photographer
Dr Christopher Tufton, minister of health and wellness, inks an agreement with Dr Orville Nembhard, director of Health Plus Associates, during a ceremony involving 11 private-sector partners who the ministry will engage to administer COVID-19 vaccines. The ceremony took place at The Jamaica Pegasus hotel in New Kingston on Monday.

With less than eight per cent of Jamaica’s population being fully vaccinated to date, Health and Wellness Minister Dr Christopher Tufton has disclosed that a significant portion of 60,000 doses of AstraZeneca might have to be discarded if shots are...

With less than eight per cent of Jamaica’s population being fully vaccinated to date, Health and Wellness Minister Dr Christopher Tufton has disclosed that a significant portion of 60,000 doses of AstraZeneca might have to be discarded if shots are not administered by the September 30 expiry date.

The vaccines at risk are part of the shipment of 300,000 doses gifted by the United Kingdom government that arrived on the island on July 30.

Vaccines have a shelf life of six months but Jamaica received the shipment two months shy of expiration, the minister said.

Tufton made the revelation on the sidelines of a ceremony during which he inked an agreement with 11 private entities to inoculate Jamaicans against COVID-19 with the blessing of the Ministry of Health & Wellness.

Tufton said that cherry-picking of vaccine brands is posing a challenge to the Government’s inoculation programme — which also appears to be a factor behind the lagging take-up of the Johnson & Johnson (J&J) shot.

On August 23, the Ministry of Health received 115,200 doses of the COVID-19 Johnson & Johnson single-shot vaccine. A little more than a month later, only about 25,000 doses have been administered.

Full payment of US$14.7 million (J$2.16 billion) for a total cache of 1.9 million doses has already been made, National Health Fund Chairman Howard Mitchell confirmed on Monday. Much of that fiscal spend might be in jeopardy if the current vaccination trend continues.

“There is less of an acceptance of the brand than other brands. That represents a challenge,” the minister said.

That raises questions as to whether the sums allocated to obtain the vaccines may go up in smoke if Jamaicans reject the single-jab vaccine.

The ministry is now working on a communication strategy to get Jamaicans to take the single-shot vaccine, said Tufton, noting that there are traditional perceptions around preferences.

“I think that the Pfizer brand has been preferred and our studies and polls suggest that largely because it is a strong brand. It has had the benefit of usage in the diaspora,” he said.

Told to wait on Pfizer

According to Tufton, many Jamaicans with relatives and friends in North America have been told to wait on the Pfizer brand. He admitted that the marketing around Pfizer has been good.

“The AstraZeneca not as much, but because it was the first one available, it also has a relatively good level of sell,” said the health minister.

Tufton reasoned that the ministry felt that many Jamaicans would be inclined to take the single-dose vaccine because of the fear of the needle.

Cautioning against vaccine discrimination, the health minister urged Jamaicans to get inoculated with the first vaccines that are available to them.

“We have to make it clear that it is not wise to discriminate against vaccines. The rule is, ‘take the first one you get’. In fact, I am prepared to say I have known people who have died ... waiting for a particular brand, not that they don’t have access to other brands,” he said.

Tufton added that unless an individual is advised by his medical practitioner not to take a particular vaccine, it would be a grave error to wait for a particular brand.

As at Sunday, Jamaica’s overall confirmed cases have eclipsed 83,000. There have been 1,841 deaths.