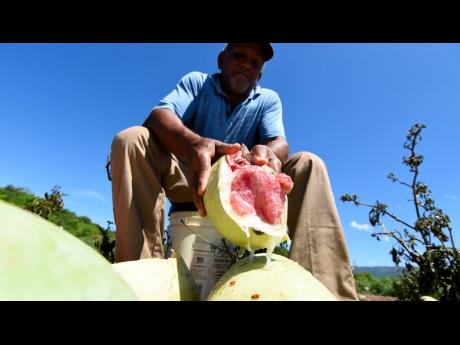 Ian Allen/Photographer
Curtis Binns, a watermelon farmer in the Comma Pen area of Junction, St Elizabeth, shows the inside of some of his produce which have failed to mature properly. Tests are being carried out to determine the cause of the problem, which has affected several farmers. 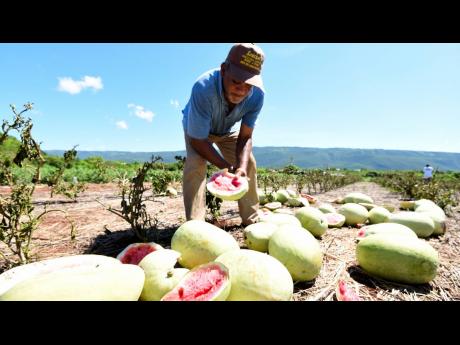 Ian Allen/Photographer
Watermelon farmer Curtis Binns examines the inside of some of his spoilt fruits as he tallies up losses from a mystery disease affecting the crop. 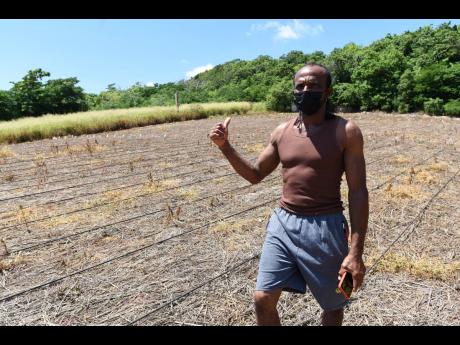 Ian Allen/Photographer
Lawrence Morgan, a watermelon farmer in Comma Pen, Junction, St Elizabeth, has started to prepare lands to plant again after he lost an entire crop to a mystery disease.
1
2
3

A mystery disease causing their watermelons to rot on the inside while appearing perfect on the outside, has caused several St Elizabeth farmers to halt cultivation of the fruit to stem mounting financial losses. The farmers said that at first,...

A mystery disease causing their watermelons to rot on the inside while appearing perfect on the outside, has caused several St Elizabeth farmers to halt cultivation of the fruit to stem mounting financial losses.

The farmers said that at first, they thought that the seeds had been compromised, but that theory was debunked when one colleague saw half of the seeds from a packet produced quality fruits after the initial half failed to properly mature.

The Rural Agricultural Development Authority (RADA) has collected samples from farmers and have submitted them for testing with the Bodles Research Station in Old Harbour, St Catherine, to identify the cause of the fruit decay

“The tests are in an advanced stage, and very soon we will be able to determine the cause of the problems the farmers are experiencing with the watermelons,” Mark Lee, acting RADA parish manager for St Elizabeth, told The Gleaner.

Watermelon farmers in neighbouring Manchester had faced a similar problem in April.

Seventy-three-year-old St Elizabeth farmer Curtis Binns, who has been in agriculture for more than 50 years, suffered losses in the region of $1.2 million after he was forced to dump 15,000 pounds of compromised watermelon, which would had fetched a price of $80 per pound had they been fit for market.

“I couldn’t tell what is causing this rare problem. I planted the melon and sold 700 pounds, and the man call me back and say the melon have in water,” Binns, a two-time champion farmer, told The Gleaner.

“I have never experienced this kind of loss before. Other farmers have been faced with the problem for a couple months now, but it is the first for me,” he added.

According to Binns, he planted different varieties of watermelon to see if the problem was with a particular batch, but they all had the same issue.

“I was even wondering if it has something to do with the chemical. It is strange, because the melon look good on the outside, but when you cut it, it full with water,” he said, adding that some of his colleague farmers, who had suffered huge losses, have decided to quit melon farming until proper tests can be carried out and a solution found.

Lawrence Morgan, who has a farm in Top Hill, St Elizabeth – the Breadbasket Parish, which is the hub of melon farming in Jamaica – suffered a similar fate and he had to refund his customers after large quantities of watermelon sold were returned because of internal spoilage.

“I am planting melon for many years and this is the first I experience this. The melon dem big and pretty, but when you cut them, the middle red, with a lot of water and the pink colour surrounding the red section,” Morgan revealed.

“Right now I am in [dire] straits because I have to buy water, seeds, grass, fertiliser and spray, pay labourer and not able to get nothing from the crop,” he continued, adding that he lost more than $1 million worth of melons the first time around, and a shade under that amount in the second crop.

After learning of the fate suffered by other farmers, Dwayne Lee was more conservative in his approach to how he planted his crop of watermelon on his Junction farm.

“I planted half of the pack of seeds and this came out good, but the other half did not come out well; they come out with the inside soft,” he disclosed.

Lee said he and other farmers, who are friends of his, have suffered losses in the millions of dollars as a result of returned produce.