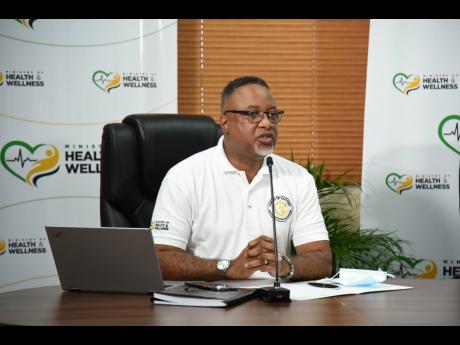 File
Permanent secretary in the Ministry of Health and Wellness, Dunstan Bryan.

In the face of withering criticism of the Ministry of Health & Wellness’ policy to expand the dispensing of the Pfizer COVID-19 vaccine beyond children to adults, Permanent Secretary Dunstan Byran is expected to make a statement on the issue when he faces Parliament’s Public Administration and Appropriations Committee (PAAC) today.

Bryan was mum Tuesday evening on whether he gave the directive for adults to be vaccinated with the scarce Pfizer COVID-19 vaccine, an apparent deviation from the Government’s initial policy that the jab was intended for children aged 12 years and older.

A clearly peeved Juliet Holness, member of the special select committee appointed to oversee Jamaica’s response to the COVID-19 outbreak, demanded answers as to why the ministry had diverted from the Government’s policy directive.

During a vaccination blitz in her constituency, Holness said she encouraged constituents to take the AstraZeneca jab instead of Pfizer as the latter was designated by the Government for children.

“I was quite surprised to see individuals from the Ministry of Health comfortably dispensing Pfizer, knowing that we had AstraZeneca coming up with closed dates and knowing that we would not have enough Pfizer to do the second dose for our children,” Holness, who is also a member of the PAAC, said on Tuesday.

The pressure building on Bryan is important on three critical fronts. The Government’s already sluggish vaccination drive is now sputtering with the country well off the pace for its target of 65 per cent herd immunity by 2022.

The mid-October resumption of face-to-face classes islandwide has been derailed by the absence of Pfizer vaccine because of a delayed shipment, dooming hundreds of thousands of students to more engagement online amid staggering levels of learning loss.

And third, Holness’ open challenge to the bureaucracy of the health ministry aligns with concerns disclosed to The Gleaner by Cabinet ministers that the executive was receiving heat for actions taken by the chief accounting officer. The ministers declined to go on the record.

That Holness is the wife of Prime Minister Andrew Holness will also not go unnoticed.

The Gleaner reported last week that the Government had to dump close to 60,000 doses of AstraZeneca as a batch of the vaccine gifted by the United Kingdom expired at the end of September.

Mrs Holness argued that the AstraZeneca that had to be dumped could have been administered to adults in need of their first dose, while reserving Pfizer for children’s second shot.

“I am sorry the Ministry of Health is not here. When a policy direction is set, it needs to be adhered to because it causes a lot of confusion afterwards,” the St Andrew East Rural MP said.

“It was not difficult for me to explain to my own constituents who, unfortunately, many took Pfizer, that for us as adults, since the Government did not reserve anything other than Pfizer for our children, allow the children to take Pfizer.”

In September, the health ministry was ramping up its vaccination efforts as it met its end-of-September target to administer some 700,000 doses of COVID-19 vaccines in Jamaica.

Approximately 280,840 people, or 10 per cent of the population, have been fully vaccinated. Almost 73,900 children have been vaccinated.