Gov’t mum on confidence in board carryovers amid NPL scandal 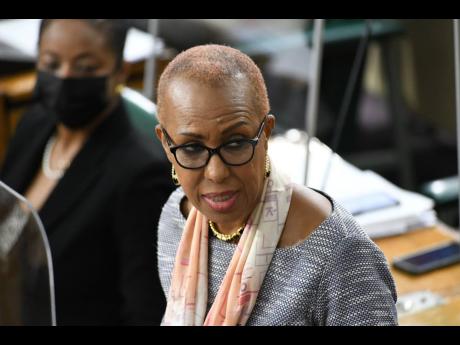 Education Minister Fayval Williams has shied away from indicating whether the controversial board of Nutrition Products Limited (NPL) still enjoys the confidence of the Government given that at least five members who had oversight of the scandal unearthed in a recent auditor general’s report remain as directors.

A report last month by Auditor General Pamela Monroe Ellis into the company’s operations for the period 2015-2021 revealed a wide range of questionable procurement and recruitment violations, including payment of $143 million to companies and individuals connected to board members and management staff to provide transportation, repairs and maintenance, and other services.

The damning report highlighted that the board had “failed in oversight responsibility” and that the former chairman, Ewart Gilzean, had ignored his fiduciary obligation and duty of care.

After a number of the breaches were detected, a new board was appointed last December. That new board includes the Bustamante Industrial Trade Union’s Alden Brown, who headed the HR committee; entrepreneur Dorothy Finlayson, who led the internal audit committee; health coach Natalie Murray; researcher Vicki Hanson; and Donovan Samuels, the Tivoli Gardens councillor.

Williams, during a virtual post-Cabinet press briefing on Wednesday, twice evaded questions from The Gleaner on whether the current board, with five carryover members, still had her blessing.

“The current board of the NPL is a relatively new board with some carryover members from the last board. As you know, the auditor general’s report was tabled in Parliament. It has been sent to the company to the board of directors for consideration and any further responses that they can give to it, and so we will have to allow that process to take its place.”

Pressed on whether the Holness administration would support a probe by the Integrity Commission into NPL’s operations, Williams reiterated that due process must be allowed.

Two boards existed over the period of the audit.

The first board chair, James Rawle, was appointed under the People’s National Party (PNP) administration and served until 2016.

The succeeding Gilzean-chaired board that is at the centre of the auditor general’s major findings was appointed in January 2017 by the Cabinet of Prime Minister Andrew Holness.

Among the findings of the audit was that NPL paid a distribution company $69.6 million between November 2010 and January 2021 to provide transportation and haulage services.

The registered owner of three trucks used was an investment company, of which Gilzean is a director and shareholder. Payments to the distribution company stopped in 2013 when Gilzean’s first tenure ended and restarted in 2017, it was revealed.

“Of note, the distribution company received delivery routes with the highest rates and was the only haulage contractor assigned to perform shuttle services, resulting from the decision to centralise the distribution of meals to schools, from the Kingston plant,” the report said.

Gilzean had also chaired the contracts and procurement subcommittee of the board and was a member of the finance committee.

The former chairman’s private business had the same address as the supplier of repairs and maintenance services that received $48 million between August 2018 and November 2020 and Gilzean was noted as the employer of an individual who was paid $7.3 million to record minutes of board meetings between April 2017 and February this year.

Asked whether Gilzean had resigned from state boards he heads, Williams said she had no information on that matter and would provide the answer at the next post-Cabinet briefing.

Gilzean is chairman of the National Works Agency Advisory Board which falls under the Prime Minister Andrew Holness-headed Ministry of Economic Growth and Job Creation. He is also on the board of the Rural Water Supply Limited, which operates from Desmond McKenzie’s Ministry of Local Government and Rural Development.