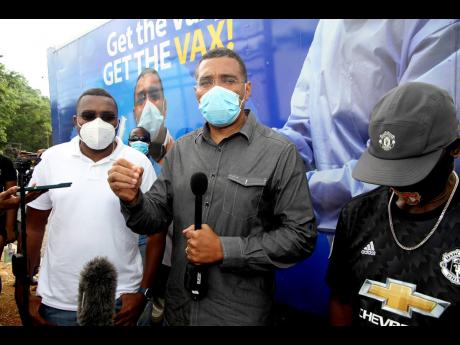 Nathaniel Stewart/Photographer
Prime Minister Andrew Holness addresses residents of Mocho while on a tour of the Clarendon North Central constituency on Thursday. To his right is Member of Parliament Robert Morgan.

The Government is hoping to deliver one million COVID-19 jabs by the end of November, Prime Minister Andrew Holness has said.

“That is not impossible and not necessarily a very difficult task,” Holness said of the million-mark goal on Thursday.

“It just requires greater focus, and so the Government will be redoubling its effort right throughout the country.”

The declaration was made at the Mocho Health Centre, one of several stops during a vaccine-mobilisation and public-education tour in northern Clarendon.

Some 809,234 doses have so far been administered. A total of 512,306 first doses, 265,257 second shots, and 31,671 jabs of the one-shot Johnson & Johnson vaccine have been administered. Approximately 10 per cent of the Jamaican population is fully vaccinated – one of the lowest rates of per capita take-up in the Caribbean.

Citing the importance of leveraging churches and trade unions as key influencers, Holness said the Government would be ramping up strategies to stave off the dumping of vaccines.

Approximately 60,000 doses of the AstraZeneca COVID-19 vaccine expired on September 30 and will be discarded. Another 200,000, with an October 31 expiry date, hang in the balance.

“The conversation around the disposal of expired vaccines does not seem to take into consideration that we receive these vaccines very close to the expiration period, and in effect, these vaccines would have expired in the country from which they were given,” he said.

The prime minister said that preventing vaccine wastage was also a civic responsibility.

“We appreciate the gift of the vaccines, and it does not, in any way, remove the obligation on the Government and on the people of Jamaica to utilise these gifts. Not because they are free, they shouldn't have been used with greater speed,” he said.

The prime minister cautioned that the destruction of stale-dated vaccines could have an adverse impact on Jamaica's international reputation.

At the Mocho Health Centre, some residents came to the vaccination site to air their disapproval of coronavirus lockdowns and curfews and perceived limited information on vaccination.

Others, like Samantha Henry, lamented the punishing effect of online classes on learning outcomes since the barring of face-to-face engagement since March 2020.

Henry said that her daughter, an 11th-grader at Clarendon College, has been struggling with virtual school. She pressed the prime minister to chart a plan to have vaccinated students return to in-person classes.

“She has been home and she's not doing well because she needs direct attention. She's struggling, and it's unfair for them to be vaccinated and sitting home,” Henry argued.

In response, the prime minister said students, who he described as “voiceless victims”, were the pandemic's most severely affected group.

“The education sector has had to be deprived of the right of education because many decide that they will not take the vaccine,” he said.

He hinted, however, that he was wary of implementing a two-tiered system of access that might be challenged.

“Jamaica is a society where rights issues have to be treated very carefully, so we are very careful in how we move to any differential treatment,” said Holness.

The Government has considered a mid-October restart to face-to-face classes with an aspirational target of 65 per cent vaccination of children 12 years and older. But the near-screeching halt to its vaccination roll-out because of shipment delays of Pfizer has virtually doomed that goal.

Children 11 years and younger have not been cleared for take-up of Pfizer although a few countries like Israel have administered it to kids as young as five.

The manufacturers of Pfizer announced on Thursday that it had formally applied to the United States government to approve its use for children under 12.

Holness said that a shipment of Pfizer vaccines, due weeks ago, was set to arrive soon. Citing flight and other logistical variables, he declined to offer a definitive timeline.

Editor's note: The prime minister targeted the delivery of one million jabs by the end of November. That would include double-dose vaccination.