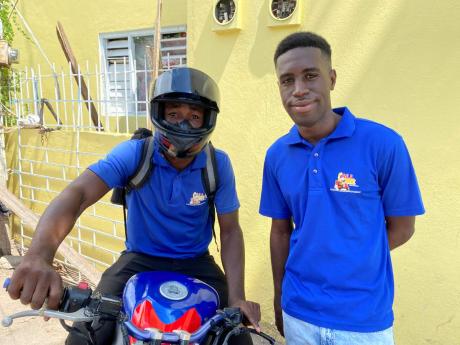 Photo by Ainsworth Morris
Keino Brown (right), 25, and Jermaine Wright, 19, have launched the Call Me food delivery service. The cousins are among the silver lining of entrepreneurs in the cloud of the coronavirus pandemic.

When the coronavirus pandemic hit Jamaica’s shores in early 2020, Keino Brown and Jermaine Wright were in danger of drowning in the tidal wave of unemployment that swept aside the jobs of more than 135,000 people at the height of the crisis. But...

When the coronavirus pandemic hit Jamaica’s shores in early 2020, Keino Brown and Jermaine Wright were in danger of drowning in the tidal wave of unemployment that swept aside the jobs of more than 135,000 people at the height of the crisis.

But Wright, 19, and Brown, 25, hatched a business dream that has delivered renewed hope and a sense of purpose for several youths in Cassia Park, Kingston.

The food-delivery industry has taken flight like never before since the outbreaks, with 19 months of curfews and lockdowns significantly curtailing movement and sapping consumer demand. That has opened the appetite for a battalion of bikes to roll out on to the country’s urban and suburban communities, boosting employment and offering a lifeline to restaurateurs who were driven to the brink.

Call Me Delivery Service was the brainchild of Wright. He and the others said they were determined not to become statistical victims of crime.

“The wrong way is two ways, you know: prison or jail. We want to empower ourselves and our parents, because our parents are suffering and we want to help them and to help our brothers and sisters who are coming up after us to show them that there is a right way to life,” said Brown on Thursday.

Brown, who is Wright’s cousin, recalled how their business started out of a crisis and determination.

Wright said he worked as a loss-prevention officer at MegaMart for four months until May 2021. He had been previously unemployed for nearly one year after he graduated from Pembroke Hall High.

Brown was formerly employed to the Ministry of Education, Youth and Information as a youth club assistant. His tenure ended in March 2020 at the start of the pandemic. Prior to that, he worked at a wholesale.

“We were sending out résumés to different companies to get jobs, and it wasn’t working out. We were trying to get summer jobs or any opportunity, but there came none, and we had youth in the community where they had bikes, but, basically, they didn’t have nobody to hire them and they had documentation [for the bikes],” Brown told The Gleaner.

The business started with two bikers and has doubled, with the budding entrepreneurs as young as 17. Wright drives a motorbike while Brown does administrative duties from his home.

Sales were slow at the beginning, but things have picked up appreciably.

Their busiest days are Thursdays, Fridays, and Saturdays between the hours of 2 p.m. and 5 p.m.

Wright isn’t surprised that he has managed to combine his longtime love for leisure with income generation.

“At a tender age growing up, I loved motorbikes, and my mother always told me that I should get a job that I love, so I got to love bearer work, so that’s why I came up with the idea,” Wright said.

Brown is a graphic designer and pushed the marketing campaign for the fledgling business, including tapping interest on social media.

They said the posters on social media helped to promote their brand and increased their clientele.

“We are at a comfortable position right now,” Wright said.

They are seeking to emerge out of informality and are in the process of registering their business after days of research.

Brown said he wants to be a source of motivation for youth to be their own bosses.

“I just want to inspire other persons to take advantage of your skill,” he said.