... but rues not locating abductor 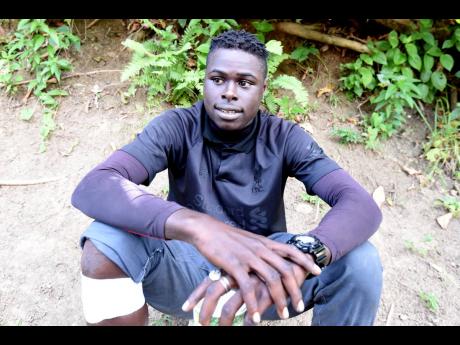 Kenyon Hemans/Photographer
Giovanni Scott of Springbank in St Thomas recounts the moment he found 13-year-old Winshae Barrett yesterday after he, along with hundreds of Jamaicans, combed sections of the parish during the two-day search. 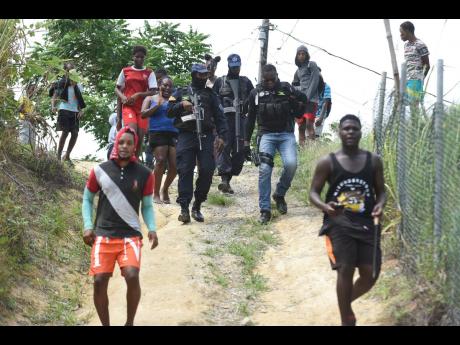 Nineteen-year-old Giovanni Scott, who rescued 13-year-old Winshae Barrett in the mountains of Spring Bank, St Thomas, after a two-day search, is now left with mixed feelings.

Although happy that Winshae was found, he was disappointed that the hundreds of people who had been combing sections of the parish for four days to recover the two missing girls have not yet located the suspected abductor.

Winshae was reportedly abducted on Saturday after going with her teenage sister to feed pigs at their home in Bath, St Thomas.

Her disappearance dampened the mood in the community as residents, members of the security forces and personnel from other agencies were celebrating the successful mission in finding nine-year-old Phylisa Prussia hours earlier after she was taken away by a man armed with a knife on Thursday.

“Mi a tell yuh, mi excited bad! We glad wi get di girl, but mi did want di youth!” Scott said in a Gleaner interview yesterday. “Mi never see him. Mi just see di girl. Is like him put the girl a front and him deh a back.”

Scott said that upon finding Winshae, he immediately gave her to her uncle as he and other men involved in the search began running in the direction they believed the abductor went, but were unsuccessful in finding him.

Scott said that he set out as early as 7 a.m. yesterday, walking for miles in the direction of the mountain where he found Winshae, after the search team was informed that the suspect was spotted in a nearby stream in Spring Bank.

“When we a go up the stream, me and the next youth deh a front and two deh a back. That [included] di girl uncle … ,” he said.

After crossing the stream, he spotted the terrified girl, who then began crying for help.

“Mi run towards her and she hug me up and when she hug mi up, di next youth come and then her uncle come and she see her uncle. She start bawl,” he recalled.

The girl was traumatised and unable to make the journey back from the mountains, so the men created a stretcher to take her miles back to safety in the Spring Bank square.

Sherene Hamilton was out with her 16-year-old son, Orane Gordon, to join the effort, noting that it could have been one of her children who was abducted.

“We nah think bout nothing else. We did just want find di girl. Sleepless nights we have, so we just come out and pull out, and thanks be to God, she is found,” the woman from Airy Castle told The Gleaner.

Several children – some armed with cutlasses, knives and sticks – accompanied adults combing the bushes into the evening as the search for the suspected abductor, Davian Bryan, whom they said was a threat to their generation.

“We will not stop until Davian Bryan is found,” was the chorus being sung by the obviously search party as they admitted that they had been whole-heartedly supporting the search for over four days, with little sleep and not much to eat.

Thirty-two-year-old Bryan, who has been listed as the suspect in both disappearances, remained at large up to press time.

He is also on bail in the Portland Circuit Court on firearm and rape charges.

Trez Martin told The Gleaner that he has been on the hunt since initial news of Prussia’s disappearance broke out.

According to the 33-year-old resident of Wheelersfield, St Thomas, “It felt like I was doing it for family. If it was someone for me, I’d want the help, too, so that’s how I look at it. From Thursday, we deh to and from the cane piece and the riverside … .”

Soaked in sweat and with tired, bloodshot eyes, he revealed that although he does a little farming, scouring woodland is not an activity he’s quite used to but a necessary sacrifice.

Martin, who shared that on a regular day he would be operating his taxi, boasted that knowing he was able to contribute to the rescue effort, he has gained more than he could ever have lost.

Addressing reporters at the Princess Margaret Hospital, where Winshae was rushed for medical examination, Assistant Commissioner of Police Gary Griffiths extended commendations to security forces and especially to community members.

“Until we apprehend the suspect, we are asking residents to exercise utmost care, especially for children, and we encourage them to move in numbers until we have apprehended this man,” he said. “We’re asking that if he’s seen, that he’s taken in alive because there are other things that we might want to ask him about. We don’t support vigilantism.”