Slain church member tried to sign over insurance to pastor 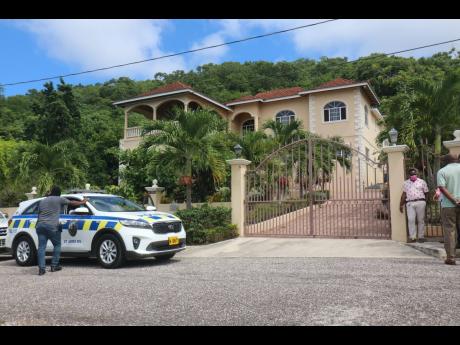 Ashley Anguin
Police prepare to search the Coral Gardens, Montego Bay home of Dr Kevin O. Smith, the pastor of Pathways International Kingdom Restoration Ministries in Paradise, Montego Bay, St James. Smith was arrested on Sunday after a religious ritual that left two dead. A third person was killed when he attacked the police with a knife.

WESTERN BUREAU: Taneka Gardner became so bewitched by her cultish pastor that she tried to remove her son and mother from her life insurance policy, making Dr Kevin O. Smith her beneficiary. Smith had the power to get his congregation to fund his...

Taneka Gardner became so bewitched by her cultish pastor that she tried to remove her son and mother from her life insurance policy, making Dr Kevin O. Smith her beneficiary.

Smith had the power to get his congregation to fund his luxurious lifestyle, and the 39-year-old woman who was sacrificed during the ‘Ark Ritual’ at the Pathways International Restoration would climb mountains to satisfy his lavish taste.

Gardner reportedly signed the documents making Smith the beneficiary just over a year ago.

Her father, Septimus Gardner, confirmed this to The Gleaner on Wednesday, stating that on Tuesday when he visited her employers, Appliance Traders Limited (ATL), he was told of this development. He could not tell the sum of the insurance policy on the life of his daughter but said that as soon as he learnt about it, he went straight to the police and made a report.

Gardner said he spoke with Detective Inspector Radcliffe Solan of the Area One Major Investigation Division. The policeman confirmed the report, but would not give The Gleaner any additional information.

However, other police sources were more forthcoming, stating that Gardner did turn over the insurance to her spiritual leader, but there were some errors on the document, so the policy remains in her mother and son’s name.

And Gardner also confirmed this, noting that on Wednesday morning, he received a call from ATL informing him that the change did not go through and that it was a misunderstanding. “As soon as I learnt that she turned over the insurance to him, the first thought that came to mind was, that’s why she was killed.”

He said even if the policy did not go through, he is concerned that the pastor was “trying something, but him never get it”.

Her employer, he said, added that it was too early to determine if her funeral expenses would come from the policy, “They say it is too early. We have to get death certificate, and it is a process that it will have to go through.”

According to Gardner, he was involved in his daughter’s life when she was alive. “I am the one who took care of her when she was growing up, and I feel bad about her death”.

He blames the cultish practices at the Pathways International for his daughter’s demise, admitting that he went there once and was so turned off by Smith’s behaviour he never returned.

The Gleaner understands that Taneka Gardner recently accessed $400,000 at a loan shark financial institution to support her leader.

“I told her that that church was not real just by the way the pastor operated. No pastor nuh behave suh. My sister’s daughter was there with her mom, who was in a wheelchair, and she pushed up her mother to the altar to get healing.

“By the time the girl deh push up har mother, him start to carry on, curse the girl, suh me seh no pastor nuh supposed to behave like that,” he recounted.

He said Smith knew nothing about the young woman, who was about 14 or 15 at the time.

Gardner said he never stepped back inside that church, noting that he was perplexed that his daughter became so engrossed in the leader. “But I tried to talk her out of it,” he said.

He said he witnessed Smith taking up his own collection and told the people how much money they should take to church.

At age 63, Gardner said he has never witnessed anything similar to what he saw at Pathways International, and he has been to many churches. “I just couldn’t convince my daughter.”

Taneka Gardner grew up in a Baptist church. She was one of three persons who died on the Pathways International compound in Paradise on Sunday. Her throat was slit, reportedly as part of a ritual. Another member was also stabbed by members of the church, and a third person was shot by the police when he attacked them with a knife.