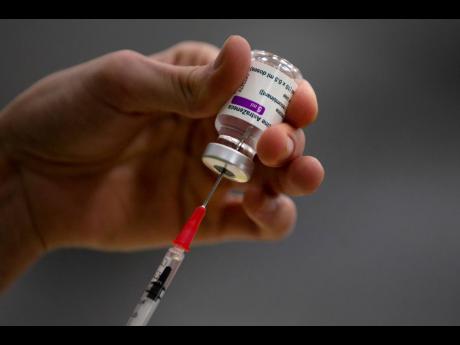 A three-month-pregnant woman and an anaemic colleague who is reportedly preparing for surgery are among five women who have filed a constitutional challenge against Cari-Med Group, a leading pharmaceutical company, over its mandatory COVID-19...

A three-month-pregnant woman and an anaemic colleague who is reportedly preparing for surgery are among five women who have filed a constitutional challenge against Cari-Med Group, a leading pharmaceutical company, over its mandatory COVID-19 vaccination policy, in what is believed to be the first such case involving employees.

In a separate filing, four workers of an investment firm, AIC Jamaica, are also challenging a similar vaccine policy, claiming that it has breached their employment contracts.

Both groups are seeking an injunction to block the enforcement of the policy at their respective companies. However, no dates have been set for the hearing of applications which were filed in the Supreme Court on Tuesday.

The five women, including three managers, are employed to Kirk-FP Limited [second defendant], which is a subsidiary owned by the CariMed Group [first defendant].

The claimants, who say they are not opposed to vaccination and have taken traditional vaccines, were forced to take legal action after their employee reportedly refused to offer them medical and religious exemption and barred them from the workplace, claiming that they did not comply with the vaccination policy requirement.

Cari-Med’s vaccination policy took effect on October 4 and requires all employees to provide proof of COVID-19 vaccination or present a negative PCR test twice per month at their own expense in order to be admitted to work.

The policy also provides for workers to be given medical exemptions, but those who are approved must also submit PCR test results, at their own expense, twice per month.

Employees are barred from working from home as an option to not being vaccinated and failure to comply with the policy, which was issued by CariMed Group for all its subsidiaries, would result in workers being blocked from attending work or required to use their vacation days or take unpaid leave.

Four of the claimants had sought exemption on medical grounds and a fifth had religious reasons.

The pregnant claimant in her affidavit alleged that she had informed her Kirk-FP that she had had a negative reaction to the H1N1 and H3N2 vaccination and was advised by her doctor to avoid COVID-19 vaccination for her safety and that of her unborn child.

“But despite the danger to my life and child, (the company) has not granted me a medical exemption, thereby requiring me to comply with the policy and to face the consequences therein,” she further alleged.

Another employee, who was reportedly diagnosed with anaemia in 2018 and has gynaecological issues, said she also sought medical exemption as her condition had worsened since the start of the year, resulting in her depleting her sick days, but was refused.

The woman, who is preparing for surgery, said despite advising her company that it would be unsafe for her to get vaccinated in her current medical situation, she was denied an exemption and similarly barred from her workplace.

All five claimants are contending that the company’s forced policy violates or is threatening to contravene their constitutional rights, including their right to freedom of religion and right to protection of privacy or other property and of communication.

They are also of the view that their right to freedom of thought, conscience, belief and observation of political doctrine, right to equality before the law as well as right to life, liberty and security of person are being infringed.

The workers who claimed they were left feeling ashamed when they were barred from the company, besides the injunction order, also want the court to restrain Cari-Med from modifying their employment contracts by implementing the policy.

In the case of AIC, the workers, who are all employed as maintenance and facilities attendants, are contending that the company has sought to impose its vaccination policy without any consultation or consent.

The policy, which took effect on September 15, mandates that all unvaccinated employees submit a weekly negative COVID-19 test result as a condition of their employment.

It further dictates that all employees must either be fully or partially vaccinated by September 23 and that workers who chose not to get vaccinated would not be allowed to enter the premises of the company and would be ‘deemed to be absent without pay’.

However, they said they were instructed by AIC to return to work on September 27 but were banned from entering the building and restricted to doing work on the outside.

The workers said in the claim form that the company’s managing director, after advising them that they would no longer be allowed to work inside and must do whatever tasks they were given, were also told them that if they did not comply, they would be removed from the premises.

The claimants’ original duties involved repairs and assessment of the building infrastructure and facilities.

The application for an injunction, besides seeking an order from the court to stop the company from enforcing the policy, also seeks to restrain the company from carrying out any unfavourable actions that may result in the withholding of the claimant’s salaries, demotion, termination, or imposition of any financial obligation.

The AIC employees like the Cari-Med worker are seeking damages, costs, and interest.

In the meantime, attorney-at-law Yakum Fitz-Henley who is representing the Cari-Med workers, said the case raises important issues about changing terms of employment and the boundaries between an employee’s rights and employers’ public-health concerns.

“Can an employer act contrary to WHO [World Health Organization] recommendations and implement differential treatment for staff who cannot be vaccinated and have constitutional reasons for not being vaccinated?” he asked.

Public Defender Arlene Harrison Henry said a lawsuit against vaccine mandates by an employer “was always going to happen”.

“This is really a matter of personal responsibility and personal choice,” she said of CVOID-19 vaccination.

The Jamaican Bar Association has produced an opinion backing decisions to mandate vaccination especially among key groups, an action the Private Sector Organisation, Jamaica Manufacturers and Exporters Association and the Jamaica Chamber of Commerce have supported.

Prime Minister Andrew Holness has signalled that a policy on ‘vaccine options’ is coming.