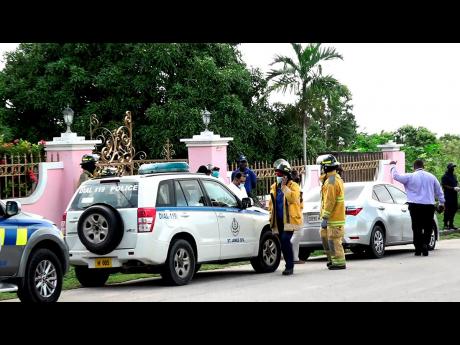 Flamboyant alleged cult leader Kevin O. Smith was a picture of humiliation on Thursday as he was transported to his Ironshore, St James, home in handcuffs by a police team to facilitate a search of two of his properties located in the upscale community.

Smith, who is known to travel in large convoys, including limousines, had a fairly large entourage, but not of his choosing. It featured six police cars, including the one in which he travelled, and a fire truck that carried the firefighters who breached his gate and the door to his luxury homes to facilitate the searches.

Detectives are still foraging for clues into Sunday’s alleged ritualistic sacrifice that led to the murders of two persons and the fatal shooting of a third by the police at the Pathways International church compound in Paradise, Montego Bay.

The much-travelled Smith, who is known for his dapper suits and colourful robes, was on Thursday clad in a simple white T-shirt and jeans pants that left him looking like everyman.

Known for his love of the camera, which he often acknowledged with his broad smile and presidential-style waves, Smith was in no mood for the cameras, keeping his gaze firmly fixed on the ground, much like the police dog that was seen strolling around his property on a leash with its handler.

The only time that Smith appeared engaged was when he was being led towards the house, which removed him out of the line of sight of the Gleaner team.

Smith’s lawyers were not present as they were on Wednesday when the police went to his other home in Coral Gardens – a development, say sources, that has not gone well with his legal team. Wednesday’s search was eventually aborted.

Efforts to ascertain the reason behind Thursday’s search without his lawyers were met with a terse response from Deputy Commissioner of Police Fitz Bailey, who heads the crime portfolio.

“I am not discussing it,” said Bailey.

Smith’s attorney-at-law, Valerie Neita-Robertson, QC, also declined to comment, stating she does not discuss her cases in the media.