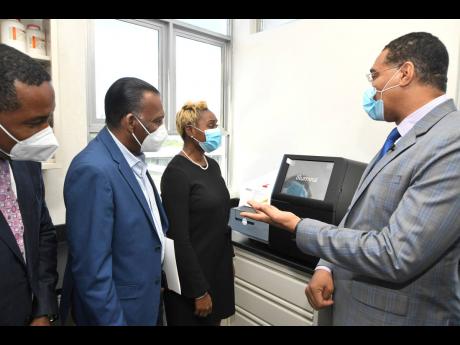 Rudolph Brown/Photographer
Prime Minister Andrew Holness (right), looks at the genome sequencer machine with (from left) Dr Carl Bruce, medical chief of staff and consultant neurosurgeon of The University Hospital of the West Indies (UHWI); W. Billy Heaven, CEO, CHASE Fund; and Juliet Cuthbert-Flynn, state minister in the Ministry of Health and Wellness, at the handover of the equipment to the National Influenza Centre at UHWI.

Speaking at Friday’s handover of a genome sequencing machine to the National Influenza Centre at the University Hospital of the West Indies in St Andrew, Holness suggested that public amenities in some spaces would be put on hold until the COVID-19 vaccination rate increases.

The machine, which was procured at a cost of $40 million through the CHASE Fund, is to test for new COVID-19 variants locally. Currently, samples taken in Jamaica are sent to the Caribbean Public Health Agency (CARPHA) in Trinidad and Tobago. While mutations are commonplace in how viruses spread, the data from genomic sequencing can provide information on which variants are the main drivers that can help determine relevant measures, noted the health ministry.

“Don’t come and ask for care package and fight ‘bout road and garbage to be collected when, from the pool of resources that is paid in taxes, we have to take out almost $10 billion to put aside for COVID response when we could have easily gotten over that if you were to be wise citizens of your own country,” said Holness.

Noting that thousands of doses of vaccines are again at risk of expiring and being dumped because of hesitancy, mere weeks after the Ministry of Health and Wellness was forced to dump some 60,000 doses, the prime minister said that “ignorant and stupid people” are at fault.

MAKE USE OF VACCINE

The Government is urging the public to make use of the approximately 190,000 doses of the AstraZeneca vaccine that will expire in the next nine days.

“We have enough vaccines. We have a whole heap of vaccines; vaccines that will go to waste because you sit at home listening to nonsense and fool-fool people,” he warned.

Holness said, also, that quacks, false prophets, pseudo-intellectuals, and people who are deliberate in misleading the public are challenging the Government’s efforts to up the country’s vaccination rate.

Holness said that the space of the public mind must never be ceded to this group, charging that the country’s universities have a duty to combat “false narratives” with the emergence of social media as an unedited space.

“If the society is going to get through this, not just safely health-wise but mentally as well, with an improved knowledge of these threats that exist, we need to see our experts out there in the forefront combating the nonsense that is being placed in social media,” the prime minister said.

Roughly 12 per cent of the country’s population is fully vaccinated.