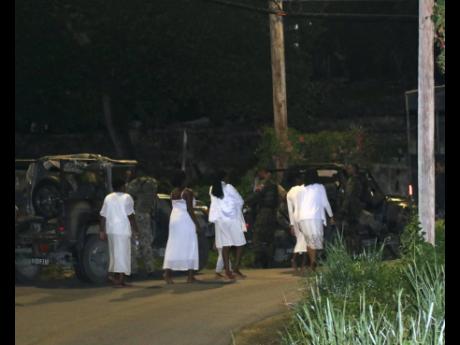 Ashley Anguin/Photographer
Under the watchful eyes of Jamaica Defence Force personnel, members of the Pathways International Kingdom Restoration Ministries make their way to a service vehicle to be taken away for questioning after last Sunday’s deadly ritual. 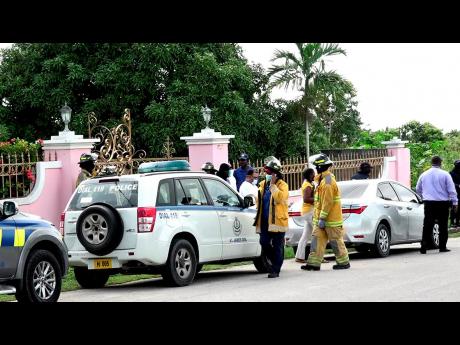 Ashley Anguin/Photographer
A handcuffed Kevin O. Smith is escorted by cops during a search of one of his properties in Montego Bay, St James, on Thursday.
1
2

Despite a wave of condemnation from all spheres of society over the reported bizarre religious practices of controversial leader Dr Kevin O. Smith, some members of his Pathways International Kingdom Restoration Ministries in St James are adamant...

Despite a wave of condemnation from all spheres of society over the reported bizarre religious practices of controversial leader Dr Kevin O. Smith, some members of his Pathways International Kingdom Restoration Ministries in St James are adamant that they will be standing behind their shepherd to the very end.

“ … A same suh Jesus did have 12 disciples and them betray Him and turn dem back on Him … Yuh can’t tell me fi turn my back pon my bishop … we haffi suffer wid him and reign wid him,” one member said earlier this week.

Smith has dominated the news since last Sunday when his church, situated in Paradise, Montego Bay, was the scene of a double murder and police shooting amid a peculiar ark boarding ritual. Three persons died, and three others were injured.

In one of his YouTube broadcasts, the Crown Bishop or His Excellency – as he is referred to by locals – had warned that those who had taken the mark (vaccine) and swore on the seal would fall down and die if they attended the planned “ark boarding” at the church on Sunday.

Smith has been accused of occult practices and is now facing multiple charges after the murder of 39-year-old Taneka Gardner and 38-year-old Michael Scott Brown, and the fatal shooting of 18-year-old Kevon Plummer, who reportedly attacked members of the security forces who interrupted the alleged sacrificial ritual when they stormed the facility on Sunday night.

Law enforcement was alerted to the events at the church when a church member escaped and called the cops.

“My God, My God! Why hast Thou forsaken me!” he cried out, as he laid handcuffed and partially nude on the floor of his worship centre last Sunday night, police sources said.

Up to press time on Friday, he was still in police custody undergoing interrogation.

Some members of Smith’s congregation say he had long prophesied that he would be persecuted for his fearless stance, likening his tribulations to the crucifixion of Jesus Christ. Several have come out in support of him since his arrest, with one member initially starting a GoFundMe campaign to raise money for his legal fees. The page has since been deactivated.

For Marigold, an educator by profession and a senior member of Pathways International Kingdom Restoration Ministries, “They crucified Christ, but He rose from the grave and I am confident that my leader will walk away scot-free.”

She said it was not until she visited the church that she received her healing.

“I had a heart condition and visited doctors, wasting my money. I went to different big-name preachers, but all they prayed making a lot of noise [yet] the problem was still there,” Marigold told The Sunday Gleaner.

She would not discuss her financial contributions to the ministry, but argued that thousands of persons have been delivered through her pastor’s healing power but have now turned their backs on him.

“They will pay because they have touched the Lord’s anointed,” she declared, as she declined having her photograph taken by our news team.

Garth, a popular media personality in Montego Bay, shared that he was indebted to Smith, and is confident that the Crown Bishop will overcome the orchestrated attacks against him.

“I owe everything to Kevin,” said Garth. “I had a very serious court matter that I was destined to lose and I went to him and he told me that he was going to let me win the case and I actually did, so I have nothing bad to say about him.”

Garth refused to say how much he paid to be victorious in the legal matter, but revealed that he did several sessions with the bishop regarding a health issue which had cost him US$300, but never regretted it.

“In fact, to talk bad about him would be talking bad about God, because he is a man of God,” Garth argued. “Many church leaders cannot do what Crown Bishop does for people, so nothing is wrong if you pay him something and I will stand by him.”

The membership of Pathways International Kingdom Restoration Ministries includes a wide cross section of persons from the lower, middle and upper classes. Figuring among them are members of the commercial community, prominent educators, bankers, medical professionals and security personnel, including a captain in the Jamaica Defence Force, who bestow adulation on Smith as equally as they praise the God he portrays.

Smith, who himself has a craving for recognition and adoration, has a Bachelor of Science in Psychology and Human Services, as well as a PhD in Theology from Vision International University in Sacramento, California. He spent about 10 years in Canada and still travels to that North American country frequently.

“There are times when we would be at the bank transacting business and at the same time he would have some boys who are always with him,” recalled a prominent businessman in Montego Bay, who asked that his name be withheld.

“What I found weird was that one day he stopped to greet me, but even though there were empty seats that the boys could sit in, they only sat after he took his seat and they all bowed to him while he sat down and they bowed down when he was getting up.”

The businessman added, “I once asked him what he prefers to be called and he said, ‘His Excellency is fine’.”

The bishop’s incarceration did not temper his hero-worship complex, as an investigator told The Sunday Gleaner that “when we started questioning him, he refused to answer any questions unless we addressed him as ‘His Excellency’”.

Clinical psychologist and transformational coach Dr Susaye Rattigan, founder of Thrive Behavioural Health and Wellness Services in Montego Bay, said charismatic leaders like Smith can easily create an environment where people have a sense of belonging, especially during this COVID-19 pandemic.

“Often charismatic leaders sell themselves as someone with special powers, a special access to God or unique abilities, but it is really through a system of impression management,” said Rattigan, who also suggested that attendees at the fatal ark ritual will find it difficult to recover.

“It will have a real negative impact on the psyche of the followers and it will really damage some of them in terms of their association with a religion, but in the next few months they will begin to feel less stigma, it will be talked about less, and then over time when their life return to normal they might even join another religious group.”

Up to press time, the police were still combing through the evidence gathered from eyewitnesses and a search of properties Smith is linked to.

He is being represented by attorneys-at-law Henry McCurdy and Valerie Neita-Robertson, QC.

“Yes, myself and Valerie Neita-Robertson are handling the matter … . We not doing any interviews at this time,” was the terse response from the Montego Bay-based McCurdy when contacted by The Sunday Gleaner.