Blood rituals a crossover into world of darkness – Pitkin 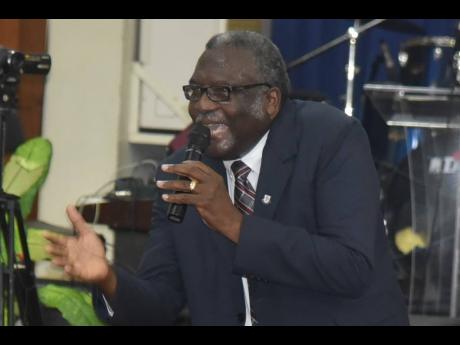 “Anywhere there is a gathering and there is the shedding of blood – whether it be animal or human – that’s a crossover into the world of darkness,” the bishop, who is custos of St James, warned during a sobering sermon at the church in Montego Bay Sunday morning.

Pitkin’s homily was delivered in the context of the macabre killing of three members of the Pathways International Kingdom Restoration Ministries last Sunday. The throats of two of them were slit in a bizarre ark ritual and a third person was fatally shot by the police when they sought to breach the church building.

Three persons were hospitalised with serious injuries. A number of animals were also slaughtered as part of the sacrifices during the night of hell, according to survivors.

Though not naming Kevin O. Smith, Pitkin described the behaviour of the leader of the Pathways International as cultic and poured scorn on the unorthodox practices of the church.

“Have nothing to do with them (those type of people),” Pitkin, who is also a member of the Jamaica Umbrella Group of Churches, told the gathering, many viewing the sermon online owing to COVID-19 restrictions.

One of the most senior pastors in the parish of St James, the bishop conceded that the events have left a shadow over the Christian Church.

The flamboyant Smith radiated the aura of an end-time prophet, leading to obeisance among his scores of followers on whom he imposed outsize authority and influence. It has been reported that the church raked in millions of dollars and engaged in nude rituals.

Smith, 39, is in police custody but has not yet been charged.

“A cult leader is manipulative, arrogant, and deceptive, and makes their followers feel loved and accepted,” said Pitkin during his sobering sermon.

The bishop urged his own congregation to rebuke him, saying, “We nah follow you no more!”, if he stepped out of the will of God.

“Silence them,” said Pitkin. “We must speak truth to power, and wherever we see falsehood and evil, the Christian ministers and leaders have a responsibility to speak publicly about those things.”

He also tagged the shock being expressed by some members of the society to news of human sacrifices as hypocrisy, reminding the nation that this information has been out in the open for a while.