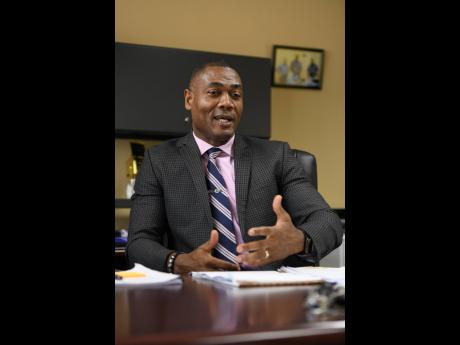 With growing concerns over poor water distribution by the National Water Commission (NWC) throughout the central region without satisfactory responses to their issues, some customers are fast becoming agitated, with plans to boycott the system if...

With growing concerns over poor water distribution by the National Water Commission (NWC) throughout the central region without satisfactory responses to their issues, some customers are fast becoming agitated, with plans to boycott the system if nothing changes soon.

But bogged down with aged infrastructure and with rehabilitative projects for pump houses taking up to a year to complete, NWC President Mark Barnett has said that there is no short-term fix to guarantee the sustained efficient services demanded by customers.

Barnett, who was speaking a Gleaner Editors’ Forum this week, said that there is now a budget of $2 billion to improve the water supply to the areas in and around Mandeville, Manchester, through the Pepper water system in St Elizabeth.

“We intend to add another two million gallons of water through that system up into Mandeville. We are building transmission mains and we are going through the approval process of the network ... ,” he said, adding that the procurement for improved pumping from the Pepper and the Spur Tree systems has been completed and the procurement for the drilling of two new wells is being finalised.

But with a growing demand for the commodity as the Manchester capital continues to see the buildout of new housing solutions, Barnett believes that the pending and current improvements will optimise service for all.

Representatives from the National Housing Trust confirmed that applications for all 70 detached two-bedroom units from the Perth Estate 1A Housing Scheme have been received and the selection process completed earlier this month.

Although there are no sustainable short-term fixes, Barnett indicated that there will be time to make the necessary improvement as the housing solutions are completed on a phased basis.

In the interim, Barnett revealed that transmission mains in the areas of Perth and surrounding areas will be replaced with larger mains, but he quickly noted that the improvement projects to the pump houses in Spur Tree and Pepper, which supply the greater area of Mandeville and other parts of the parish, will take approximately one year.

“We will see improvement coming from the Kingsland reservoir into that general area in the short term, but in terms of increasing capacity coming up the hillside, that is going to take a longer time,” said the NWC president.

With similar issues of low water distribution in areas of Clarendon, St Elizabeth and Trelawny – parishes that border Manchester – Barnett revealed that the matters are being addressed as best as possible.

“St Elizabeth is a matter of distribution. It has a lot of groundwater resources ... . In southern St Elizabeth, the populated areas are sparsely distributed so it will take a lot of effort,” Barnett noted.

He said there are plans to increase transmission mains that will seek to move water from Parottee down to Treasure Beach.

“We have completed works in Luana up to Middle Quarters. We are still working to replace service from Sandy Ground into Black River and we are also doing a number of well rehabilitation activities,” he added, noting that there was a similar set-up in Clarendon; however, there are some challenges north of the parish.

“ ... There are vulnerabilities in terms of the type of sources that we have to produce water from ... . We have made attempts to drill wells up in the Rock River area that weren’t successful, but there are a number of activities happening,” he said.