‘We may be out another five years from now’ 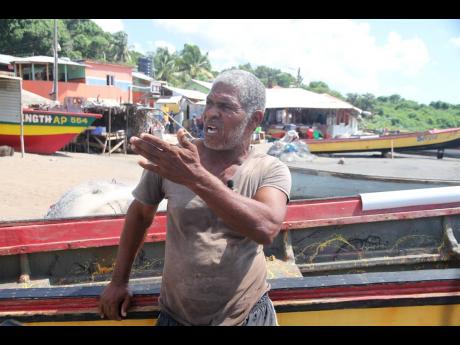 Nathaniel Stewart/Photographer
Fisherman Sylvester Morgan says persons have had to move their sheds further inland because of beach erosion in Alligator Pond. 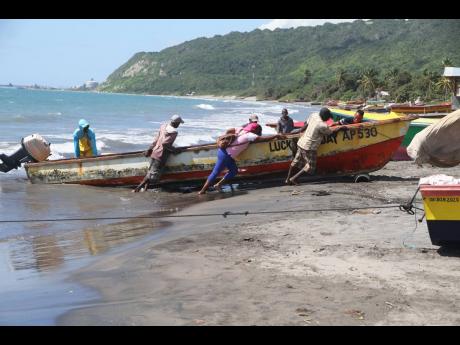 Nathaniel Stewart/Photographer
Fisherfolk pull a boat on to the beach in Alligator Pond, Manchester. 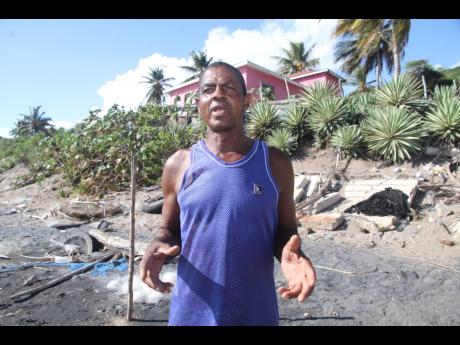 Nathaniel Stewart/Photographer
Clinton Ford, fisherman of Top Bay in Alligator Pond, Manchester, has been using old tyres to slow beach erosion which has destroyed his shop and now threatens his house. He has had to use rope to secure the tyres as high tides have pulled some of them into the sea. 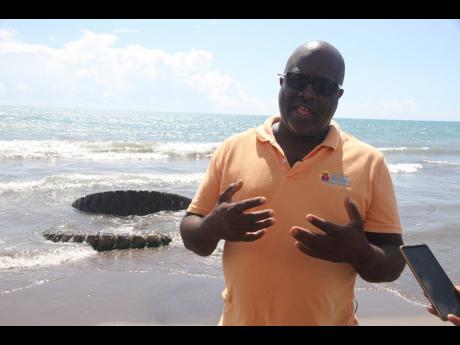 Nathaniel Stewart/Photographer
Evrol ‘Blackie’ Christian, owner of Little Ochie Seafood Restaurant and Bar in Alligator Pond, has placed large tyres along the shoreline to alleviate the pace of beach erosion. He is appealing for state intervention and no more promises. 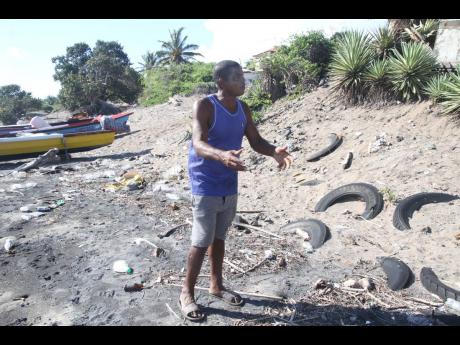 Nathaniel Stewart/Photographer
Clinton Ford, fisherman of Top Bay in Alligator Pond, Manchester, has resorted to using old tyres to slow beach erosion that has destroyed his shop and now threatens his house. Here he shows where his fence post once stood.
1
2
3
4
5

ALLIGATOR POND, Manchester: Makeshift barriers and damaged buildings metres away from the shoreline in the Alligator Pond area paint a grim picture of loss and worsening danger for those whose residences and livelihoods are threatened by the...

Makeshift barriers and damaged buildings metres away from the shoreline in the Alligator Pond area paint a grim picture of loss and worsening danger for those whose residences and livelihoods are threatened by the eroding beach.

Residents of the southwestern Manchester village recount the sea’s slow but persistent march inland, forcing them to relocate to higher ground and abandon spaces they once considered eternal playgrounds.

However, stacks of blocks and other building material offered a different narrative in the Top Bay area of the community, as residents construct permanent homes, manoeuvring loose sand with the hope that the sea does not reach their backyards.

Michael Owens, who lost his home more than a decade ago, said he watched as strong winds and turbulent tides dismantled everything he had worked hard for.

“I was on the veranda sitting down, me and my girlfriend and children were there when it happened. It was zinc and concrete, two room, kitchen, veranda and the bathroom was to itself,” he recollected.

What he managed to save was tied to ropes and dragged up the hill by those who came to his rescue, he said.

Having received assistance from friends and family over a five-month period to build a temporary house, Owens said he no longer harbours safety fears, as he is now further inland.

But that fortune has not favoured his neighbour, Clinton Ford, who was one of the first residents to build a conncrete house in the area and is now the closest to the shoreline.

Ford said that 13 years ago, the water swept away a shop he had built, forcing him to find more ways to create temporary barriers in a bid to save his home.

“Me have to beg help and get the rock stone and old tyre and dump it in front it (the shoreline),” he told The Gleaner.

“When the weather come in more, it dig it up and me have get rope and tie it again and look some more rock fi save it ... ,” he added, referencing his use of tyres as a buffer.

The distance of the shoreline from his property now is frighteningly close compared to when he was younger, said Ford.

He said that he lost “a whole heap o’ millions” in destruction to his three-room shop.

“It was concrete right through ... . Mi did deh far from the sea and it just come in whole heap. The seafront just mash up,” said Ford, adding that even his wife has left the property to construct a house in safer territory.

“But true me is a fisherman, mi still deh here and mi nah run lef me yard. Me did say to God say, ‘If anything, take the shop, but nuh take the house ... and mi glad mi still have somewhere to sleep.”

Ford said that his greatest fear is the threat posed during the six-month hurricane season.

As global weather and climate patterns evolve, the Caribbean has become more used to bouts of hand-wringing as Atlantic hurricane seasons become more unpredictable, throwing up earlier emergence of systems and a cluster of monster storms that deliver powerful blows to economies.

Storms have cost Jamaica around J$10 billion of damage to infrastructure and farms since October 2020.

“When mi hear say storm a come, mi fret, because mi live right inna the sea. October is normally the roughest month, but this year wasn’t bad for me ... ,” said Ford.

With the National Environment and Planning Agency (NEPA) engaging stakeholders from as far back as 2016 for preliminary studies on coastal erosion, Alligator Pond residents say they have yet to get a clear update on intervention, including whether revetment similar to that undertaken along the shoreline of downtown Kingston was viable.

But Jamaica Social Investment Fund (JSIF) Managing Director Omar Sweeney disclosed that he was unaware of any such consideration for revetment works in Alligator Pond, hinting that a similar undertaking would cost approximately US$10 million (J$1.5 billion) per kilometre, depending on the scale of the project.

Evrol Christian, owner of the popular seaside eatery Little Ochie, is perplexed by the lack of action, having been optimistic after witnessing visits by environmental experts to the community. Christian is hopeful that the coronavirus pandemic will not distract from what he views as Alligator Pond’s existential crisis.

“If you see how fast the erosion is acting, we may be out another five years from now ... . I don’t know how far the plan is, how effective it is, or when it will come in place, but I know a plan is out to help Alligator Pond,” the businessman told The Gleaner.

“ ... South coast is booming and any help that we can get from any department to stay alive, I would appreciate it.”

Christian said he has spent tens of thousands of dollars to truck more than 45 loads of stone to provide a temporary barrier, having lost three of his restaurant gazebos. But those efforts, he acknowledges, will not be enough.

Director of environmental management and conservation at NEPA, Anthony McKenzie, said that the multi-hazard ecosystem vulnerability assessment study, carried out under the Jamaica Disaster Vulnerability Reduction Project, by JSIF has found that erosion in the area is occurring at the pace of one metre per year.

“Based on the analysis, it is noted that erosion has been between 11 and 33 metres, and that has been over the last 20 years,” McKenzie told The Gleaner.

The NEPA director said that the project should be in the design phase now, but referred The Gleaner to JSIF for more granular details.

“That design phase will look at the appropriate measures to as best as possible reduce the vulnerability of the area. It may include some hard and soft engineering solutions,” McKenzie said.

However, Sweeney said that JSIF is about 60 per cent into the study, which will help to develop a coastal atlas for the island and provide information for future intervention.

“The wider spatial planning for the country, from an environmental or climate-change mitigation standpoint, requires you to consider many aspects ... ,” said Sweeney.

“So we put all of that in the plan and we are able to map the vulnerabilities to make particular decisions, if the Government is, let’s say, going to build a seawall.”