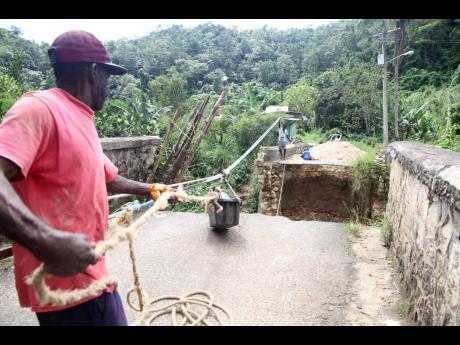 Nathaniel Stewart/Photographer
Raymond Powell of Troy reels in a crate across the bridge in the border town of Troy. The 1869 bridge, which divides south Trelawny and northwestern Manchester, collapsed in August following heavy rainfall. 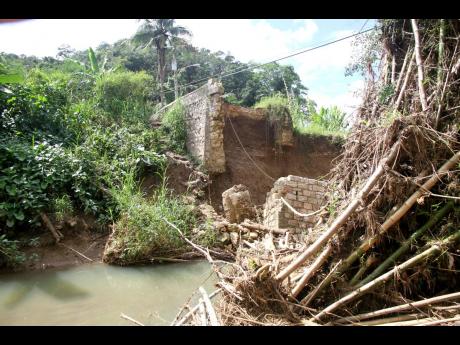 Nathaniel Stewart/Photographer
Hundreds of residents and other commuters have been cut off from safely crossing the Manchester-Trelawny border on the Troy-Oxford main road. 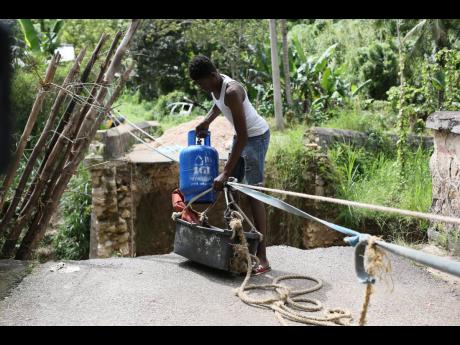 Nathaniel Stewart/Photographer
A courier collects a gas cylinder which was ziplined across the chasm where the more than century-old bridge in Troy once stood. 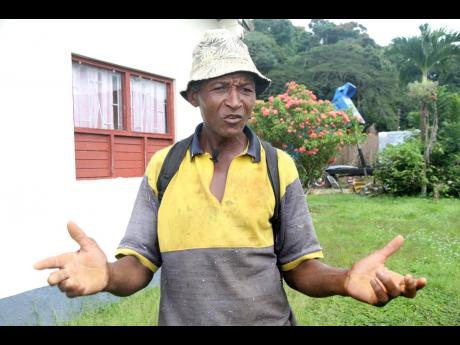 Nathaniel Stewart/Photographer
Errol Smalling, farmer of Troy, Trelawny, shares the difficulties he has experienced since the bridge collapsed in August.
1
2
3
4

With a hardy bucket attached, a makeshift zipline transfers goods and people precariously over a yawning river in Troy, a rural district bordering northwestern Manchester and south Trelawny.

It’s not for leisure.

That’s the daily dance with danger ordinary residents engage in, risking their lives after a key bridge collapsed along the Troy-Oxford main road.

The crumpling of the bridge more than two months ago was the exclamatory end to disintegration over a decade, residents say. Now, the gaping chasm is now viewed as a death trap.

Trelawny resident O’Brian Campbell, who offers a delivery service in the area, could be seen with his colleague ziplining empty gas cylinders across the river having distributed cooking gas to various households earlier.

He said that his job has not only become more difficult, but also dangerous.

“The edge [of the bridge] constantly a break off, so you can’t come out too much on the edge when we are taking off the items because it will break off with us. Basically, it is a trap right now,” said Campbell.

“We have to use one bike transfer the goods this side, then we have to go across and use the crate [attached to the zipline] and pull them across ... . It’s hard, but we have to help out the customers.”

Built in 1869, the bridge has been used by thousands of persons crisscrossing Trelawny, Manchester, and St Elizabeth seeking a shorter trip compared to some alternative routes which are as much as 60 miles longer.

But the structure, according to residents, has done its time.

“There is no mixed material; a pure loose stuff, no iron nuh in it, so this yah bridge yah do over time ... . They did some little patching one time because the same [column] did a dig out and they box it up with plyboard and cast it,” Raymond Powell told The Gleaner.

“But true the river a get deeper, the footing a go give way and the bridge have to give way.”

Powell said that Chinese engineers have since visited the area but residents have received no information on the plans going forward.

In last week Tuesday’s State of the Constituency Debate, Manchester North Western Member of Parliament Mikael Phillips indicated that the project could take years to complete.

“I was hoping that we would have gotten the same response as the member from East Rural St Andrew,” said Phillips, referring to Juliet Holness, wife of Prime Minister Andrew Holness.

“But they (NWA) are giving us a timelime that with this bridge, it’s going to take six months for geological work, then six months for design, and then hopefully it can meet the budget.”

This delay, he indicated, could cost lives in the interim.

Manager of communications and customer service at the NWA, Stephen Shaw, maintained that no timeline could be given for the completion of ongoing surveys by engineers as they mull viable technical solutions.

“They are looking at coming up with an appropriate design for that location ... It is in progress and I can’t tell you how long that will take ... . I don’t have a schedule in front of me, so I cannot give you a schedule,” Shaw told The Gleaner.

Those who have the greatest concerns are farmers, as well as teachers and students of the Troy High School, who have lost access.

“... It costs an extra five-gallon of gas to travel back up to into Manchester, through Norway, just to come back to Oxford. Teachers have to park their cars over there to walk through the river to go up to Troy High, and if the river lift up, them stand up on this side looking at them car and can’t cross,” said Powell.

Having seen previous flooding incidents in the area, chairman of the Trelawny Municipal Corporation, Collen Gager, said he is hoping that the bridge-redevelopment projects will include river-training works.

“If you go to certain parts, you will see that it [river] is eating away and coming over in some parts of the road. All of the banking up the road is being eroded, and we will have to watch that so there is not a flooding spilling over into Townshend,” said Gager, who is mayor.

Farmers in the area lament that the dislocation has had severe economic consequences, causing transportation costs to double on longer routes in moving produce and equipment.

“Because of the bridge, everything just collapse. We can’t get to move. It affect we bad,” said farmer Errol Smalling.

“It a affect more than 500 people [within the area] because it’s a busy road.”

Smalling revealed that his daily routine across the bridge has now been reduced to once weekly, with the far-from-ideal makeshift structure highlighting the need for a temporary bridge.