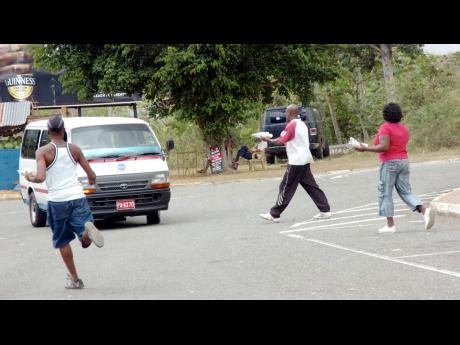 File
In this 2009 file photo, vendors at the Melrose Yam Park in Manchester rush towards an approaching vehicle in an attempt to get a sale.

Councillors of the Manchester Municipal Corporation (MMC) on Thursday expressed their strong disapproval of what they consider to be the health department’s unwarranted opposition to the reopening of the Melrose Yam Park.

The facility, which was ordered closed by the health department on August 16 because of health and sanitation breaches, was reported to be at 60 per cent readiness by Chief Public Health Inspector Charmaine Palmer-Cross after some rehabilitative works were undertaken by the corporation.

She said that although a timeline for reopening has been proposed, the green light would not be given until all the outstanding works have been completed.

“While it may seem at times that we may come down a little hard, it is not because we want to be hard, but it is because we have a mandate to ensure that safe food is provided in a safe manner to the [people] ... ,” Palmer-Cross insisted at yesterday’s corporation meeting.

At last month’s meeting, MMC CEO Winston Palmer suggested that based on the progress of works, the park could have been reopened this week.

But following an assessment on Wednesday, Palmer-Cross reported that the resurfacing of the flooring, the installation of sinks for vector-proof screening, tiling, and maintenance of the overgrown vegetation are yet to be completed.

This did not sit well with MMC Chairman Donovan Mitchell, who indicated that there seemed to be an addition to the list of requirements each time the local board of health discussed the matter.

“… From where I sit, 95 per cent of the things that are the responsibility of the Municipal Corporation are completed. The other things that are not completed are from the persons who operate the facility … , ” said Mitchell, the mayor of Mandeville.

He said that the outstanding work can be done by this weekend and that the repainting work is a matter for J. Wray & Nephew to decide as it would be doing the rebranding.

“ … We have to be more considerate as it relates to these people (vendors). They have their children going to school, and the little money they make can hardly carry these families ... . There must be a way we can work the thing out and bring out some of the persons to at least start back up their livelihood,” Mitchell added.

But Chief Medical Officer of Health Dr Nadine Williams said that a facility could not be passed while works are ongoing.

A dissatisfied Mitchell then pointed to the state of some health facilities, saying that the current state of the park was no different from other buildings in operation.

“ … I don’t see why we are at this point. The property is three acres, and if the grass has grown up so you can’t walk on it, it is not the only place. There are health centres I have been to yesterday where I had to skip the grass. Health centres are leaking and wasp is there, and all of that … ,” the mayor charged.

Asked by Knockpatrick division councillor Cleon Francis whether a meeting was held with the health officials prior to the sitting, Mitchell’s seemingly infuriated response included what appeared to be an accusation of sabotage.

“ … This is the people’s business. Have you read the reports that have gone into the media? And when the officers from the Manchester Health Department made silly, frivolous, and vexatious comments? That is why we are where we are today because we didn’t give them permission to have a parking lot over by the road and works department (an extension property of the MMC).”

Christian Councillor Desmond Harrison asked whether there was any proof of the statement made by Mitchell, but the chairman indicated that he would speak with the member privately.

Williams indicated that since works were ongoing, a second inspection could be done in short order and the process to reopen could be expedited.

It was suggested that the second inspection be done in the coming week.