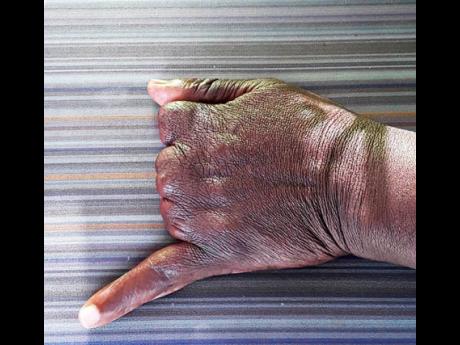 Photo by Tamara Bailey
Deslyn Gordon, 69, lost three of her fingers in a machete attack by Kevin Hollingsworth in Comfort, Manchester, 10 years ago. Hollingsworth committed suicide shortly after the attack. 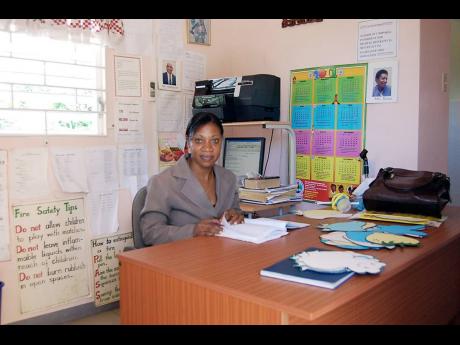 File
Gail Anderson, principal of Hope Village Basic School, was killed by her partner in March 2016. He shot himself dead afterwards.
1
2

COMFORT, Manchester: Her reconstructed arm with 13 pins and a hand with three missing fingers are the macabre reminders of the hellish ordeal 69-year-old Deslyn Gordon survived 10 years ago in Comfort at the hands of man who tried to kill her and...

Her reconstructed arm with 13 pins and a hand with three missing fingers are the macabre reminders of the hellish ordeal 69-year-old Deslyn Gordon survived 10 years ago in Comfort at the hands of man who tried to kill her and, later, ended his onslaught by taking his own life.

The deceased, identified as Kevin Hollingsworth, was the former partner of Gordon’s daughter and the father of her grandson.

But all that became seemingly meaningless to Hollingsworth when he tried to kill several members of the family, including the then boyfriend of his son’s mother.

“Sometimes when I remember it, I get fearful and I have to pray about it ... . When I recall what happened, I realised that I could have been gone, but God is the reason I am still here,” Gordon told The Gleaner.

Recounting the lead-up to the May 11 attack, Gordon said that she was home with her relatives when Hollingsworth gained entry through the bathroom window just before dawn and tried to strangle her grown son.

Having escaped his grip, Gordon’s son reportedly ran out of the room shouting for help, calling for those within earshot to prevent what he thought would have been a bloodbath.

Fearing the worst, Gordon said she took cover in a nearby fowl coop, but not even that could protect her from the machete-wielding Hollingsworth, who soon found her and began hacking her with the weapon.

“I got chopped all over my body. In my head, in my face, on my hand. Doctor had to open my head,” she said of the surgery.

“The incident has affected my speech and memory.”

Revealing that she was unaware of what triggered Hollingsworth’s attack, Gordon believes it could have been sparked by her daughter’s decision to end the relationship between them.

Gordon believes that Hollingsworth’s determination to kill her daughter that day was unmatched, as he had tried in the past, failed, and was arrested and charged for the attempt.

“I remember him walk pass me one day and say, ‘Mi come back, you think me gone and see mi come back fi kill the gyal and you hide di gyal from me … .’ He tried to cut her throat the first time, and the second time him chop her on her shoulder,” he said.

It was while on bail that he made his third attempt, but according to Gordon, the assailant was stopped by the crowd that soon converged at the house following news of the attack.

“He didn’t get to do it, so instead him go ‘round a di corner go hang himself,” Gordon added.

The 69-year-old survivor said the attack has set her back and forced her to give up dressmaking and the baking of bammies for sale in large batches, as she once did.

Reflecting on the traumatic experience, Gordon said she had passed out in the midst of the attack and could not walk, see, or talk in the immediate aftermath.

“I was in a different world, and is months later I truly see what happened to me … . Even now I get confused when I speak, and I find it difficult to remember some things … ,” Gordon told The Gleaner.

“Sometimes when I go out and I forget things and I see how people respond, sometimes I cry, because it’s like a mockery.”

While Gordon was able to overcome the decade-old nightmare, relatives of Gail Anderson, an infant-school principal who was killed by her common-law husband, before taking his own life, wish their loved one had had a similar fate.

Anderson’s body and that of her partner – a then Jamaica Defence Force member, John Williams – were found at the home they shared in Williamsfield with gunshot wounds to the head in March 2016.

Having completed her master’s degree weeks before her death, Anderson not only had plans for the Hope Village Basic School she headed, but for the happy life she would create with her partner.

“I never know that that would [happen] between the two of them because of how I see them live … . But me have to just forgive,” said Gail’s mother, Audrey Anderson.

“Every second when I think about her, tears run. I have a picture of her that I look on, and when me cry and cry and finish, mi say, ‘Lord, You know everything best.’”

Though the pain has not become easier to bear, the elder Anderson has clung to her faith and memories to adjust to her daughter’s absence.

Statistics from the Jamaica Constabulary Force indicate that between 2011 and 2019, Manchester, St Catherine North, St Andrew, and St Mary had the highest number of murder-suicide victims, recording a total of five each over the nine-year period.

Of the 37 victims across the island for the period, St Elizabeth and St James had four victims; Clarendon, three; Kingston and Trelawny, two; and Hanover and St Ann, one each.

Further analysis revealed that all perpetrators were males. Thirty of the 37 victims were female.