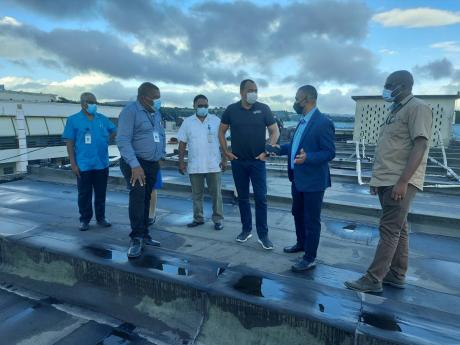 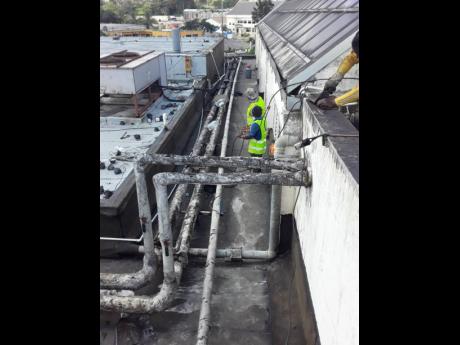 Photo by Tamara Bailey
Workmen effecting repairs to a section of the roof of the Mandeville Regional Hospital in Manchester on Thursday.
1
2

Health and Wellness Minister Dr Christopher Tufton on Thursday indicated that a number of health facilities are set to have long-standing issues addressed, now that the COVID-19 pandemic is not currently having a significant strain on resources.

He was speaking on Thursday during a tour of the Mandeville Regional Hospital, where roughly half of the drainage system on the roof is being rehabilitated to the tune of $38 million.

The works, which include replacing defective water-proofing membrane and improving concrete designs to properly channel rainwater to the existing drains, began in September and are now 95 per cent complete.

Senior projects manager at the Southern Regional Health Authority (SRHA), Damion Morgan, said that repairs are to be effected to sections made of zinc will be done shortly to completely resolve the issues.

SRHA Vice-Chairman Michael Stern said that this was the first roof-repair exercise in decades.

“Over the last 18 months or so, we have spent a lot of time on COVID, rightfully so, because that was the clear and present threat and it continues to be a threat. However, if we are not careful, we’ll lose sight of some of the other very important aspects of public health,” the health minister said.

Tufton, however, stressed that despite a move to address these other crucial areas, resources remain limited and workers and clients of the healthcare sector have suffered in the process.

“ ... The reality is that COVID, to some extent, has caused a dislocation and disruption of routine [healthcare] response and patients, in some instances, needing that routine care have been neglected and some would have suffered the consequences of that. The extent of this is being assessed,” the health minister said.

Without de-emphasising the importance of the COVID response and management, Tufton, who was touring the health facilities in the southern region, said the focus has been shifted from even emergency care, placing patients in a very unfortunate position.

With a fourth wave on the horizon, the health minister believes a balance needs to be struck so no one will suffer greatly as a result of reallocated resources.

“ ... We have to look carefully at how we live with COVID and get back to the normality that is required to give equal access to public healthcare,” he said.

With an overwhelming increase in COVID cases earlier this year pushing additional spaces at the Mandeville Regional Hospital to be retrofitted for use as isolation wards, CEO Alwyn Miller reported that things have returned to some level of normality.

“ ... The numbers have gone down, and as at Thursday morning, we had six patients, and if you recall we are coming from 150. We have transitioned our Isolation Three, which is our paediatric ward, back to use as a paediatric ward,”

He said that with the possibility of the island experiencing a fourth wave, the outpatient department that was relocated to the neighbouring Mandeville Seventh-day Adventist Church will remain there until the end of January.

Tufton said that the hospital administration has the power to use resources as necessary to meet demand.

“We are not going to hold COVID beds if there is a demand on the system for non-COVID, chronic care,” he said, noting that there is usually an increase in hospitalisations at this time of the year.

This was confirmed by Miller, who noted that as of Thursday, there were 254 patients at the facility, 30 patients more than on Wednesday.

“Included in that were victims of five motorbike accidents on Wednesday,” said Miller.