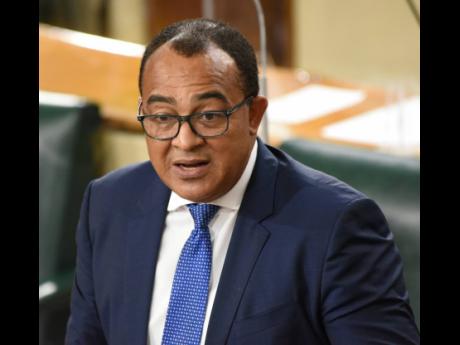 Tomorrow, the Cabinet will discuss Jamaica’s plans to address the new omicron variant of COVID-19 that now has the world on high alert, triggering travel bans, and which the World Health Organization (WHO) has declared to be “of concern”, Health Minister Dr Christopher Tufton said yesterday.

“At this point, it is an evolving situation. We will continue to monitor and consult with our bilateral and multilateral partners,” he told The Sunday Gleaner, noting that his team will give a report to Cabinet as part of the regular COVID-19 update.

“We have taken the decision on travel restrictions, as many other countries have done, and will determine other measures based on monitoring and consultations. Based on what we know so far, this variant strain does have the potential to be more transmissible than previous strains. This is the conclusion so far.”

Tufton continued, “We, therefore, must take it seriously and continue to urge Jamaicans not to get complacent but rather take the measures that will give them the best possible reaction – vaccines, mask-wearing, physical distancing, and sanitising.”

Yesterday, following Friday’s alert of the new omicron (b.1.1.529) COVID-19 variant that was first reported in South Africa, Jamaica joined several countries in issuing travel restrictions on countries in which the virus is said to be predominant.

The countries are Botswana, Eswatini, Lesotho, Malawi, Mozambique, Namibia, South Africa, and Zimbabwe, from which all visitors within the last two weeks who are not citizens or permanent residents of Jamaica are not allowed entry. Jamaicans and permanent residents who have visited those countries in the last 14 days will be allowed entry, but will be subjected to a mandatory State-supervised 14-day quarantine.

It will be a wait-and-see move to know what impact, if any, the omicron variant will have on the current relaxed COVID-19 protocols, especially as the busy Christmas season approaches.

“I’ve seen some information that has come out. I need to read some more because of what I’ve read, but it is a new variant, you can get it and the WHO has identified it as a variant of concern (VOC),” she offered, adding that the local COVID-19 spread, for the most part, has been steady.

“But it needs to continue to go down; even the positivity rate needs to continue to go down. It has been going down, we have been noticing, so we have to take heed from that. Some days, the positivity rate fluctuates. We’ve seen it go down even to 4.5 one day, and then the next day it is 12. Overall, it is hovering around nine per cent positivity. So we need that to go below five per cent.”

Up to Friday, Jamaica recorded an overall 91,122 cases of the coronavirus and 2,385 deaths. Recording 96 cases for the day, Friday’s positivity rate was 9.4 per cent.

LEAVE IT TO THE EXPERTS

Paul Bourne, head of institutional research at the Northern Caribbean University (NCU), believes politicians should step away from the COVID-19 information front-line and let medical experts take charge. This was his main recommendation at the end of a two-month study by the university probing religious views and the impact on vaccination efforts islandwide.

“That call is even more urgent now with this new development of a new variant. All politicians have to do is set the framework, and they have already done that. Now, they just need to let the scientists do their jobs,” charged Bourne, citing distrust for political representatives among the key obstacles in national vaccination efforts.

“Let the scientists and epidemiologists come out and tell people what to do, give people the education and breakdown that they need,” he added, contending that medical practitioners in the background of COVID-19 press conferences are not enough. “They always have a secondary voice. Let them have the primary voice. The minister calls a press conference ... let the epidemiologists do their jobs.”

According to the findings of the NCU study 50.6 per cent of religious Jamaicans said they had no issue, irrespective of their faith, with vaccination. Another 38 per cent were not sure, while 11.2 per cent said their religious position was against inoculation.

At the same time, 49 per cent of religious respondents said they had not taken the vaccine, compared to 73.4 per cent non-religious participants who said they have not yet taken it.

Some 27 per cent of non-religious participants said they had not taken any of the COVID-19 vaccines.

“There is a need to remove the politics from science, as this is part of the hesitancy of young and non-religious people to accept the vaccine. Simply put, the Government of Jamaica should immediately cease from offering tangible or intangible items in exchange for people’s willingness to accept the vaccine against COVID-19,” read one recommendation of the online quantitative study that Bourne said had a margin of error of three per cent.

In the meantime, the WHO said on Friday that the new omicron variant, which was first reported to the agency on November 24, has a large number of mutations, some of which are very concerning.

“Preliminary evidence suggests an increased risk of infection with this variant as compared to other VOCs. The number of cases of this variant appears to be increasing in almost all provinces of South Africa. Current SARS-CoV-2 diagnostics continue to detect this variant,” WHO said.

While investigations continue into the new strain, the WHO urged countries, among other things, to enhance surveillance and sequencing efforts, report initial cases/clusters associated with variants of concern infection, and coordinate with the international community, field investigations, and laboratory assessments to improve understanding.