JLP chairman says jury out on his political future 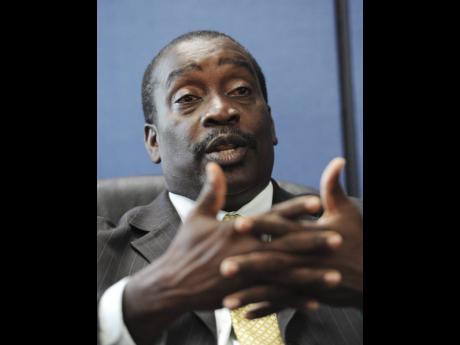 With another storm gathering in the Ministry of Transport and Mining he now heads, Robert Montague is placing his political future in the hands of his St Mary Western constituents, even as the possibility exists that he could face a challenge for...

With another storm gathering in the Ministry of Transport and Mining he now heads, Robert Montague is placing his political future in the hands of his St Mary Western constituents, even as the possibility exists that he could face a challenge for the chairmanship of the Jamaica Labour Party as it hosts its annual conference today.

Earlier this year, a Sunday Gleaner exposé had placed him in an uncomfortable position after it revealed that the Airports Authority of Jamaica (AAJ) and its subsidiary, NMIA Airports Limited, had invested some US$3 million of taxpayers’ funds in real estate start-up FirstRock Capital Holdings, becoming its third largest shareholder under controversial circumstances.

Prime Minister Andrew Holness expressed grave concerns about the matter, while Finance Minister Dr Nigel Clarke admitted in Parliament that the first of two investments – which saw the AAJ, over a period of 15 days, swinging from deciding against buying US$1 million worth of shares to doing so with some board members shut out of the ultimate decision in February 2019 – was “contrary to regulations”.

Montague now finds himself in the middle of another firestorm, this time involving Clarendon Alumina Production (CAP), through which the Government holds its 45 per cent stake in the Jamalco alumina refinery in Clarendon.

Last week, Montague refused to address the issue, telling The Sunday Gleaner that Holness had intervened and that CAP was now with the Ministry of Finance, “where I have twice recommended it should go”.

All this unfolds in the shadow of a multimillion-dollar police used car scandal, which was still unresolved up to last month, as Permanent Secretary in the Ministry of National Security Courtney Williams told Parliament’s Public Administration and Appropriations Committee that some 30 cars – or $100 million in refunds – were still due to the Government four years after a botched contractual arrangement between the Ministry of National Security and O’Brien’s International Car Sales and Rentals.

The company was contracted to supply 200 vehicles to the Jamaica Constabulary Force, at a cost of $400 million, in 2012, when Montague headed the Ministry of National Security.

Clarke’s admission of the breaches in the AAJ-FirstRock scandal and Holness’ pronouncement that ministers should respond to questions asked – in the wake of House Speaker blocking Montague from answering Opposition questions on the matter after also citing that the Integrity Commission was probing the investment – though done weeks apart, reinforced widely held views that Montague’s tenure as chairman was on the political auction block.

Last week, Montague told The Sunday Gleaner that where there is “political smoke there is political fire”.

Asked if this could be his electoral term, the three-term member of parliament, after about a minute of silence, responded: “The jury is still out on my future in politics.”

Pressed further, he said: “I expect a verdict when the jury comes in.

“I am under some pressure – family and business on one side, and on the other side, from the people of my constituency.”

Family will be a consideration to future political decisions, and the recent passing of his sibling has led to a reorganisation of the family, the minister disclosed, noting that personal pressures, coupled with demands of representation, are being contemplated.

His response may be of interest to today’s 78th JLP annual conference and to members of the party’s Central Executive, which will meet after the event to elect a chairman.

Although some individuals occupy two positions, only one vote will be cast per person, with an anticipated total of roughly 150 ballots.

“It is the right of any member of the party to challenge for any position in the party. Chairman is one such position,” Montague said, noting that he intends to put himself forward to continue in the post.

New blood was critical to politics, he said.

“I think it is time to sit back and watch young people rise. One can’t be selfish in politics. You play your part and you must exit. It’s been good for me, my time in politics. And if the people allow me to continue, I will have to think about it, given what I have said,” Montague explained.

Several names have been linked to possible challenges for the chairmanship, some of whom have denied any such consideration. Two contacted by The Sunday Gleaner declined comment, while a third did not respond.

Montague prides himself as having his ears to the ground and said that he was neither blind nor deaf to happenings.

“A lot of things have been happening and for some time. Included in the happenings is a lot of mischief, much of which is being made by the media, but if these seeds are being sown to create disunity in the party, it will not succeed,” he said, again reiterating that he would not be drawn on the CAP controversy.

Andrew Simpson, the principal of CCAP who provided consultancy services to CAP on five previous contracts, did not respond to a Sunday Gleaner request for an interview.

“This is the JLP. Everybody saw what disunity did to the party years ago. I can tell you, no one will allow that to happen again. The JLP has one leader and that is Andrew Michael Holness,” Montague told The Sunday Gleaner.

He believes that he is paying a political price for ministerial decisions, especially in the mining sector, as well as the fallout from the AAJ and CAP affairs.

“I reckon I have stepped on some powerful toes because of some decisions that have been made and actions taken, but, for the ordinary persons with no godfather to benefit from this country, somebody has to look out for them. I made a commitment to the people in my constituency, who sent me to Gordon House, that I will not do them a disservice. I am keeping my promise,” he stated.

Montague insisted insistence that the titling process for individuals relocated/displaced after their lands were mined did not earn him any brownie points either, and that many individuals had benefited from drawn-out processes.

There are about 3,000 outstanding titles, some going back decades.

He is also of the view that the return of a further 2,000 hectares of land to the Cockpit Country has also brought out political Spanish machetes of middlemen. The Government modified Special Mining Licence (SML) 173 – lands slated from mining adjacent to the Cockpit country. Now 6,226 hectares will not be mined.

On Friday, Noranda said in a release that it gave up the land, but Montague said that the Government, through the Office of the Prime Minister and the Ministry of Mining, had taken it back.

“Those in the know say that the best bauxite was in those hectares. Prospectus by the company would have identified the quality of bauxite in the ground. A lot of persons [stood] to benefit, so yes, I am of the view that I have upset some people in the process, but change does not come without friction,” he said.

Montague said he has no political godfathers, and he, too, has clawed his way in life.

However, he had a political godmother in Lady Bustamante, wife of the JLP founder.

His political credentials also go back the formation of the JLP, as his father, Asquith Montague, was part of Sir Alexander Bustamante’s inner-circle group of soldiers, who formed the party 78 years ago.

Montague was first elected councillor of the Carron Hall division in 1990 and became mayor of Port Maria in 2003, serving until 2007, when he was elected to Gordon House. He also served as a senator after his 2011 parliamentary defeat.

He also triumphed as JLP chairman in 2012 and has served in that capacity since.