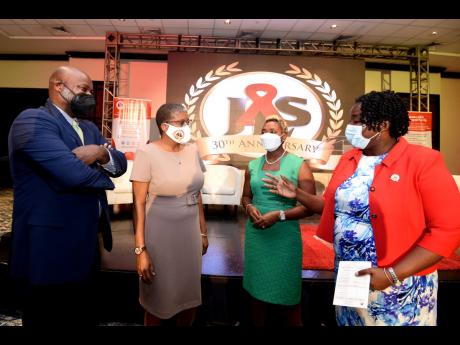 A funding fallout from global donors is threatening to worsen already-waning public education campaigns on HIV/AIDS. Alisha Robb-Allen, acting senior director in the HIV/STI Unit in the Ministry of Health...

A funding fallout from global donors is threatening to worsen already-waning public education campaigns on HIV/AIDS.

Alisha Robb-Allen, acting senior director in the HIV/STI Unit in the Ministry of Health & Wellness, said the ‘Treat All’ policy under which all infected persons source antiretroviral treatment, free of charge, has devoured a significant portion of budgeted HIV response funding.

At least 84 per cent of low- and middle-income countries have adopted the Treat All policy since the World Health Organization’s (WHO) recommendation that people diagnosed with HIV start antiretroviral treatment.

“Public education requires funding, and we have been doing public education. I think there was a shift in public education when we had ‘Treat All’ being implemented to persons living with HIV and there may have been a small fall-off in our prevention voice,” said Robb-Allen, who was speaking during a recent Gleaner Editors’ Forum ahead of today’s commemoration of World AIDS Day.

Currently, the ministry provides funding for testing supplies and antiretroviral medication and test monitoring. Allen-Robb said, however, that more needs to be done.

“We have to recognise that HIV is a social disease and it is not just about health. There are other government entities and we need to look to them to see how it is they can provide funding to the partners for different avenues or aspects that our CSOs are involved in so that when there is that fall-off – what are our other governmental agencies have to offer so that the fringes of the response that are necessary are still supported,” said Robb-Allen.

But Kandasi Levermore, executive director of Jamaica AIDS Support for Life (JASL), cited dwindling donor funding as a gathering threat to the war on the epidemic.

“We are a middle-income country. When donors come to Jamaica and we are pushing our Benz and Bimmers, it shows to them ... , ‘Let us look at the data.’ The World Bank says we are a middle-income country based on our assessment, and so the money needs to go to persons who have the greatest need and so it has reduced our funding and shifted the donor funding from the country to other countries that they believe have a greater need,” said Levermore.

The JASL executive director contends that the Government should increase its financing of HIV programmes.

Manoela Manova, UNAIDS’s country director, described Jamaica’s adoption of the Treat All policy as substantial progress, “which means that every Jamaican living with HIV is receiving, free of charge from the Government of Jamaica, antiretroviral treatment”.

The Government budgets $600m annually for antiretroviral treatment for a capacity of 18,000 people.

However, an estimated 9,000 persons with HIV, who have not sought help, are not receiving antiretrovirals.

Manova lamented the lack of current data, with granular disaggregation, on HIV infections, which she said slows strategic response to at-risk communities.

She argued that speedy action by the Government could halt a disruption in HIV services in the short term. A number of gains are in jeopardy, she said.

“We have to really be prepared. It’s not going to happen overnight, that’s why we need this big time span from six to nine years to prepare and put the systems in place, so that the Government not only allocates more resources, but it has to have the mechanism in place to transfer this resource to the civil society and community organisation,” she said.