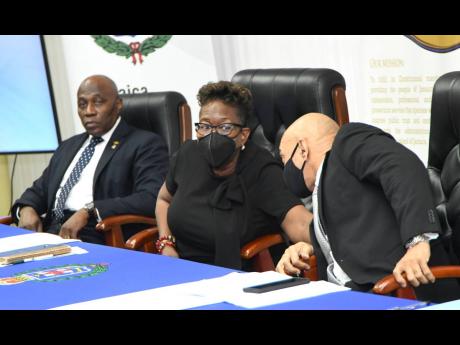 Rudolph Brown/Photographer
From left: Chief Justice Bryan Sykes looks on as Director of Public Prosecutions Paula Llewellyn and Police Commissioner Antony Anderson engage in conversation during the launch of three ‘Digital Footprints’ training videos at the Office of the Commissioner of Police in St Andrew yesterday.

Director of Public Prosecutions (DPP) Paula Llewellyn has emphasised the importance of collecting, analysing and presenting digital evidence that can stand up to scrutiny in court.

Speaking at the launch of three training videos dubbed ‘Digital Footprints – From Crime Scene to Courtroom’ at the Office of the Commissioner of Police in St Andrew yesterday, Llewellyn said that the production would benefit law enforcement agencies locally.

Personnel from several law enforcement bodies such as the Major Organised Crime and Anti-Corruption Agency, the Financial Investigations Division, the Integrity Commission, and the Independent Commission of Investigations, among others, are slated to benefit from the training videos.

Noting that the prosecution has the burden of proving its case beyond a reasonable doubt, the DPP said that digital evidence has become a common feature of criminal investigations and was increasingly being relied upon by to prove cases against accused persons.

“The collection, analysis, and presentation of such evidence are critical in ensuring the integrity, cogency, reliability, and admissibility of the evidence that is presented in court,” Llewellyn told an audience comprising members of the judiciary, the police, and other investigative agencies.

Digital Footprints was prepared by the Cybercrimes and Digital Forensic Unit in the Office of the DPP with support from the United States Embassy and the Jamaica Constabulary Force.

According to Llewellyn, the presentation explored best practices in the collection of digital evidence during the investigative process.

She said that the production would also assist the legal fraternity in understanding the different concepts and terminologies used by experts who analyse the data and findings.

The country’s chief prosecutor suggested that her department would also share the material with defence counsel.

Llewellyn quipped that on several occasions, prosecutors, despite disclosing all the digital material to defence counsel, later discover that the information was not read thoroughly or understood.

“The judge, who is up there in the stratosphere, will never understand or know that the only thing that the poor prosecutor was left to do is to take a spoon and spoon-feed defence counsel,” she said.

Commenting on some challenges faced by prosecutors, Llewellyn indicated that at times, what was presented to her office might appear to be solid evidence “on paper”. However, she said that in the preparation of the matter, “a wise prosecutor” would be sure to work closely with the digital or forensic examiner and police officers who may have come into contact with the material.

“A prosecutor has to have a poker face because when you think what you have on paper or in a report becomes a mirage or an illusion, you have to dig deep in respect of your research of the law or come up with a well-executed notice of intention to produce,” she said.

“It is our job to research the law and to seek to play the hand that we have been dealt. Most times, we are able to do that, but sometimes even with the best will in the world, our efforts are confounded.”