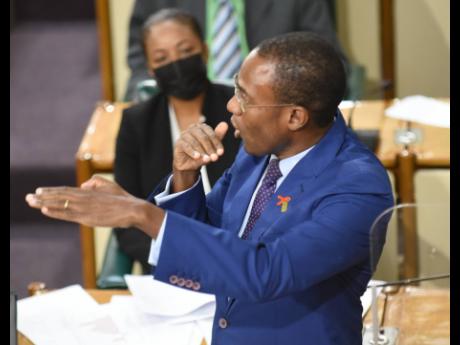 File
The proposed legislation tabled by Minister of Finance Dr Nigel Clarke is expected to shore up confidence in the structure and composition of public-sector boards.

As the last set of measures under the Disaster Risk Management Act expire on Wednesday, Prime Minister Andrew Holness is expected to tell the country what, if any restrictions, are to be introduced for the upcoming holidays and the new year.

Health officials have long forecast a fourth wave of COVID-19 to spread across the country in early 2022.

The prime minister’s statement comes amid the rapid spread of the new Omicron variant of COVID-19 in many countries, including the United Kingdom and the United States from where Jamaica receives more than 80 per cent of its tourists.

In his last address to Parliament on COVID-19 measures, Holness signalled that his administration was not inclined to reimpose lockdowns going forward.

“The Government continues to act in the best interest to preserve lives and to preserve livelihoods as best as possible. We are being very cautious in reopening, and just to be clear, we are not going to shut down again,” he said in a statement to Parliament on November 16.

It is not clear whether the spread of the new COVID-19 variant will influence the administration’s plans going forward, but the prime minister had said that the measures to contain the spread of COVID-19 were never intended to be long term and would soon come to an end.

Also during today’s sitting of the House, Clarke is expected to pilot a resolution paving the way for increased transparency in the appointment of persons to public body boards.

The new regulations state that Financial Secretary Darlene Morrison shall have the responsibility of establishing a database of prospective directors from which persons shall be selected for appointment to a board.

According to the regulations, the database shall include information on prospective directors for whom a due-diligence check determined that such persons have the requisite knowledge, skills, and experience for appointment to a board.

Further, the regulations stipulate that no person shall be eligible for inclusion in the database if the person is a member of parliament or senator, as well as a councillor of a local authority as defined in the Local Government Act.

Persons will also be barred from serving as a member of a public board if such an individual does not consent in writing to being subject to a due diligence check.

Civil-society groups and the Private Sector Organisation of Jamaica have been clamouring for the passage of the regulations governing the appointment of boards in the public sector.

The calls grew louder in recent times in the wake of several scandals that have bedevilled some public-body boards such as the Airports Authority of Jamaica (AAJ) and the Norman Manley International Airport Limited (NMIAL).

On November 9, Minister of Transport and Mining Robert Montague announced the dissolution of the boards of the AAJ and the NMIAL in the wake of the First Rock investment scandal.

In September, the auditor general urged the Ministry of Education, Youth and Information to immediately call for full disclosure of all existing contractual and transactional arrangements with connected parties at Nutrition Products Limited after it was revealed that a former chairman ignored fiduciary responsibility and duty of care.