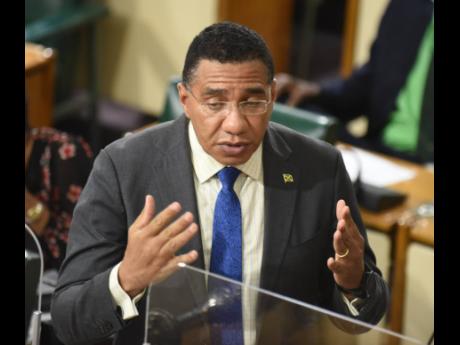 Even as a projected fourth wave of COVID-19 looms large for the new year, Prime Minister Andrew Holness’ announcement of a shortening of the daily curfew hours during the Yuletide season has received widespread support from the parliamentary Opposition, and health and business experts.

Holness on Tuesday outlined adjustments to the measures implemented to combat the spread of the virus, shaving off an hour of the night-time restrictions.

The measures are expected to go up to January 14.

Holness said that while the Government is making preparations for the fourth wave and the Omicron variant by increasing hospital bed capacity to 800, investing in oxygen generators and increasing access to COVID-19 vaccines, deaths would be inevitable.

“The only thing I can say is that your life is in your hands ... . The Government is going to move to return the economy and the country to normalcy and we’re doing so with great caution and with great care,” the prime minister said.

Opposition Leader Mark Golding said that the adjustments were welcomed and suggested that the curfew hours be shortened by an extra hour to allow for shoppers and merchants to maximise on commercial opportunities.

“I think it’s important that the time be realistically set ... . If it is set at a more realistic time, then compliance will improve,” said Golding.

In a Gleaner interview late Tuesday, Dr Mindi Fitz-Henley, president of the Jamaica Medical Doctors Association, said while there is a collective sigh of relief that families will be able to gather for the holidays, the level of adherence to protocols will determine how the country fares in the new year.

“Although we may have an increase in cases, we’re hoping that it will not translate to an increase in severe illness, hospitalisation, and deaths,” she said.

Fitz-Henley warned that close monitoring of Omicron and how it operates in other countries will be crucial to how Jamaica responds when cases are detected here.

Head of the Jamaica Manufacturers and Exporters Association (JMEA), John Mahfood, told The Gleaner that his preference would have been to maintain the previous time band, but he acknowledged that he understands the rationale behind the decision.

“The issue really is that even when they go to 9 p.m. and now 10 p.m., there isn’t sufficient police out there that can monitor and control what goes,” he said, adding that nightly parties have continued despite the curfews.

“We have to be very careful how we move too quickly from that... Hopefully, in those two days we won’t see a major spread with the likely parties,” he said of the after-midnight curfews for Christmas Eve and New Year’s Eve.

President of the St Catherine Chamber of Commerce and Industry, Dennis Robotham, held a different view, calling the revised measure a great relief for businesses.

According to Robotham, the business community has suffered severely with the advent of the pandemic.

“The hope is that there won’t be any unruly behaviour which will adversely affect the positive change,” he told The Gleaner.

Several business operators in Spanish Town, Linstead, and Bog Walk expressed overwhelming support and appreciation for the increased commercial hours, with vendors reporting a significant shift in the mood of the business community there.

“The announcement has me in a hopeful mood, as the extra hour can help to recover some of the losses suffered throughout the pandemic,” Spanish Town-based businessman Ewan Hamilton said.

Store operator Marcus Brown, who said that he reduced his staff complement from seven to three because of the decrease in revenue from the curfew, is looking to rehire.

“I can now move the complement to five, so that is two less unemployed individuals,” Brown said.

In Linstead, market vendors are hoping that this is the beginning of normality.

“The announcement is a great feeling for us in the Linstead Market, as the Grand Market will be alive once more. So we welcome the changes and hope that it is a sign that normalcy will return,” Sharon Thompson said of the anticipated shopping frenzy on Christmas Eve.

Operating hours for beaches have also been extended to 5:00 p.m. an hour up from the original cut-off time.

The gathering limits for funerals, weddings and annual general meetings remain unchanged as well as the protocols for public entity events.

The mandatory work-from-home order is to end on December 31.