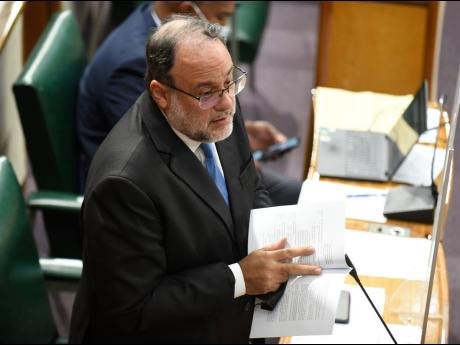 Kenyon Hemans/Photographer
Leader of the Opposition, Mark Golding, makes a point during Tuesday’s sitting of the House of Representatives.

The Passage of new regulations regulations will introduce sweeping changes to the way the boards of public bodies are appointed and carry out their duties – a point of concern amid a swirl of scandals in the Holness administration.

Opposition Leader Mark Golding has suggested that a cap be placed on the number of nominees political parties can recommend to the database from which appointments will be made to public boards.

That recommendation came before lawmakers in the Lower House approved, on Tuesday evening, a resolution titled the Public Bodies Management and Accountability (PBMA) (Nomination, Selection and Appointment to Boards) Regulations, 2021.

In his contribution to the debate, Golding said he had concerns about the inclusion of political parties in the list of groups that can nominate persons to be included in the database for selection.

However, Attorney General Marlene Malahoo Forte supported the inclusion of political parties registered under the Representation of the People Act to nominate persons.

“No sensible person leading the Government can bring persons into the administration who will sabotage the direction in which the Government wants to go,” she said.

Malahoo Forte asserted that registered political parties “must not be shy to nominate persons who meet the criteria because they do need people that will support the general direction of the Government when we operate in this competitive political space”.

While acknowledging the point made by Malahoo Forte, the opposition leader said that “what we really need to avoid is the excessive politicisation of public bodies at the governance level”.

In his contribution to the debate, Prime Minister Andrew Holness signalled that not all members of his Cabinet had embraced the PBMA regulations.

“The Government you elected wrestled with this issue internally because not everyone sees this as an absolute necessity,” Holness said.

The prime minister noted that some concerns were raised in relation to the regulations. Citing an example, Holness said there was concern as to why senators who were not elected could not serve on public boards while their counterparts in other jurisdictions were able to do so.

“The view that won out is that there should be a clean and clear separation between the elected class and the civil society asked to serve on public boards,” he said.

The prime minister also commented on a concern about the appointment of persons whose philosophy and thinking were not aligned to the Government’s.

“That is a challenge that deserves serious consideration,” Holness said.

The prime minister said that if a minister gave a policy direction that did not meet the approval of a board, this could create tension and lead to sabotage or non-performance.

However, Holness said after extensive research, he was comforted that there were no significant situations where public bodies defied the political class. He said they usually followed through on policy directives.

He said that with the approval of the PBMA regulations, ministers of government would now have to be far more vigilant in developing policies and issuing directives to boards.

The prime minister also noted that with a higher level of independence being accorded to boards of public bodies, the Government will be insisting that they complete and deliver their annual reports on time.

Finance and the Public Service Minister Dr Nigel Clarke, who piloted the resolution, said that the new rules governing public boards would not apply to educational institutions.

The regulations singled out five public bodies of strategic importance whose directors would have to undergo fit-and-proper tests to serve on the boards.

The entities are the National Water Commission, the National Housing Trust, Petrojam, the Port Authority of Jamaica, and the HEART/NSTA Trust .

At least two of them – Petrojam and the HEART/NSTA - have come under public scrutiny for impropriety.

Clarke said that those public bodies deemed to be of strategic importance have a sizeable asset base or are considered to have a significant economic impact and can pose a fiscal risk.

In a move towards gender equality on boards, the regulations prescribe that the total membership of a board shall comprise a minimum of 30 per cent of either men or women.