Nurse who was abducted in good spirits 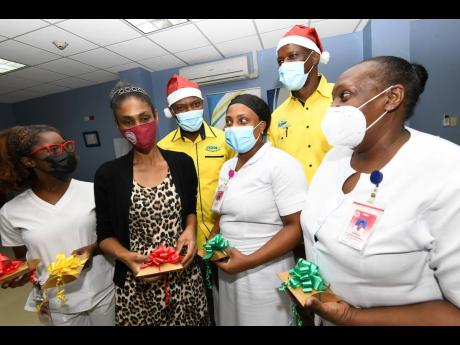 Rudolph Brown/Photographer
Robert White (left, background) and Mark White (right, background), directors of the Sanmerna Foundation, share a light moment with nurses (from left, foreground) Lamoyje Fletcher, May Daley, Sian Smart, and Joan Cole after they were presented with spa gift packages for their service during the COVID-19 pandemic. The Sanmerna Foundation gave spa packages to 25 nurses across the health sector. Tuesday’s presentation took place at the University Hospital of the West Indies.

Colleagues of Reniece Fletcher, the 28-year-old nurse from the University Hospital of the West Indies (UHWI) who was abducted on November 1, say she is doing well after the bizarre experience one month ago.

She was among three women who were held at gunpoint and robbed after getting into a Toyota Probox taxi.

The police said all three women were abducted at different locations across St Andrew. The first was in Bull Bay, the second at the UHWI, and the third in the vicinity of the back gate at The University of the West Indies, Mona.

Two of the women were released about 7:30 a.m. on November 2 near the Kingston Public Hospital, while Fletcher was let go in Duhaney Park, St Andrew.

All three women reported that they were forced to tell the robbers the access code for their bank cards.

In an effort to cheer up Fletcher for the festive season, the nurse, along with four other colleagues from the UHWI, was selected to benefit from complimentary Jencare spa treatment packages financed by the Sanmerna Foundation.

Reniece’s colleague, Lamoyje Fletcher, one of the beneficiaries who lives with Reniece at the UHWI nurses’ residence, declined to speak in detail about Reniece’s recovery but said “she has had good days and bad days”.

“We work together and we live together. She has a strong support system. ... We talk to her every day and nice her up. We give her space,” Lamoyje told The Gleaner on Tuesday.

Lamoyje said it was unclear whether the Fletchers were related, but added that they treated each other as sisters.

She reported being “distraught and scared out of her mind” when she heard that Reniece had been abducted.

Lamoyje also said the fears of persons in the search intensified, when they heard that two of the three women who were abducted were released, and Reniece was not released.

“We were wondering what they’re doing with her... We were very fearful at that time,” Lamoyje added.

Reniece’s family and colleagues are now relieved at her safe return,

And what’s on the agenda for the Yuletide season?

Being pampered at the spa – possibly together.