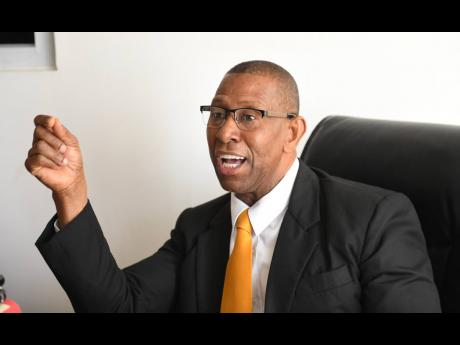 Dismissed dean of discipline at Hopewell High in Hanover, Alfred Grayson, was dealt another blow in his efforts to retain his job after the Supreme Court upheld, on Wednesday, the school board’s decision to terminate his employment.

However, he plans to take his fight to the Court of Appeal.

Grayson, following a hearing with the school board, was fired from his job in April 2019 for being absent on several days.

The teacher was found guilty of professional misconduct, unpunctuality, inefficiency, and neglect of duties.

Grayson had contended that he was on the job at the time the board claimed he was absent.

He also argued that his job required him to be away from the compound at times, as he had to go on the street to ensure that students were not late for school.

Grayson, consequently, challenged the board’s decision via an injunction in the Supreme Court and was granted a stay until a judicial review hearing, which was held on December 7 and 8.

Attorney-at-law Tessa Simpson, who represented the school, told The Gleaner on Wednesday that Justice Anne-Marie Nembhard refused the relief and declaration sought by Grayson to quash the board’s decision to fire him as dean of discipline.

She said that Grayson, as a result of his conduct in initiating the judicial review proceedings, was also ordered by the judge to pay the school board’s legal fees.

But Grayson’s lawyer, Hugh Wildman, said that his client will be appealing the high court’s ruling.

“The personnel committee breached his rights by denying him his right to natural justice but the judge is of the view that his behaviour was not satisfactory, which to me is irrelevant.

The appeal will be filed by early next week, he said.