Dad: My boy was no saint

Thanks gangsters for killing crime-obsessed son 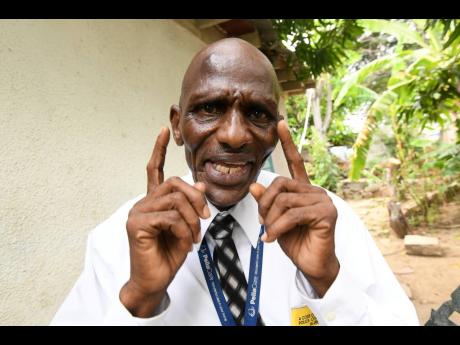 Rudolph Brown/Photographer
John Martin recounts how he earnestly warned his son, Robert Martin, to abandon his life of crime. Robert was killed by gunmen in Tower Hill, St Andrew, on December 4.

Gangster-turned-lay evangelist John Martin watched more than 50 times a video of heavily armed attackers who drove into the Tower Hill, St Andrew, community and murdered his son at a cookout last Saturday.

Robert Martin, otherwise known as ‘Sheldon’ or ‘Luther’, failed in his bid to outrun his attackers, who had handguns and rifles.

The elder Martin, who has condemned his son’s killing but admits that the 35-year-old was just as evil as his attackers, told The Gleaner that he had been receiving death threats.

According to the grieving dad, persons have labelled him a traitor for his tough-love stance.

“You all kill my son, and now you are telling me you want to kill me and you’re gonna call me Judas? You all must be the Judas,” he said.

The elder Martin said that his son was on a charge of murder and had been reporting regularly to the police.

“Me wouldn’t mind shake the killer hand and tell him thanks fi kill my son because I should have killed him my own self because he won’t listen.”

His 13-year-old granddaughter is distraught at the news of her father’s killing. She reportedly froze then screamed before throwing herself to the ground.

John Martin said he had repeatedly warned his son to abandon his life of crime, reporting that Robert had even attempted to kill him once because he urged him to stop indulging in robberies.

“My son took my heart out of me. He took my name and rub it into the dirt,” said Martin. adding that some persons wanted him to cover up his son’s wrongs.

Having lived a life of crime himself and experienced its dangers, Martin said that he begged Robert to relocate from Tower Hill.

The elder Martin is now left with an empty room and a broken heart.

He said he will not attend his son’s funeral and will encourage his granddaughter to stay away as well.

“All I want her to do is focus on her exam, come out good, come out well,” he said.

John Martin said he had heard that there would be reprisals, but he is appealing for an end to the bloodshed.

Martin says he has reported the death threats to the police.

The Hunts Bay police are investigating the murder.