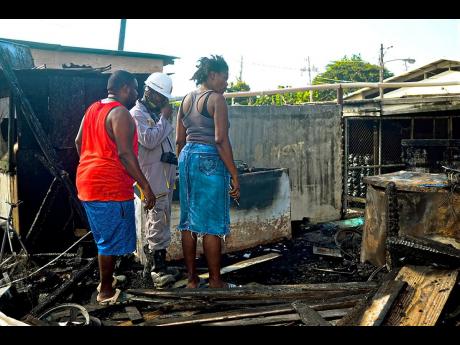 Photo by Christopher Thomas
District Officer O’Neil Kerr (centre), a fire inspector attached to the Jamaica Fire Brigade, surveys the charred rubble of three shops that were razed at the Charles Gordon Market on Sunday. With him are Gregory Johns and his mother, Jacqueline Whyte, vendors whose shops were also destroyed in the blaze.

Fire investigators were working up to late Sunday afternoon to determine the cause of a fire that destroyed three shops at the Charles Gordon Market in Montego Bay, St James, earlier in the day, resulting in losses of up to $3 million.

While the investigators carried out their work, two shop operators, Gregory Johns and his mother, Jacqueline Whyte, looked on despondently as they wondered about their next move after the financial loss.

Johns said he had lost 28 bags of onions, plus Irish potatoes, money, four fridges, and other possessions.

For Whyte, she will now have to find a way to repay the value of the liquor she had stored in her shop.

“I did ‘trust’ the liquor I had there, and on the Friday before this, I took up my money two times and said I would pay for them, but I never felt so good about it because my Sabbath was drawing near, so I said I would come down on Monday morning to pay,” White told The Gleaner.

“When I heard about the fire, because I have high blood pressure, the person who called me said I should just relax because he had something to say to me, and then he told me.”

Noel Russell, who witnessed the incident, said that nothing was saved despite colleague vendors’ efforts to salvage items from the inferno.

“It was like an explosion, like you hear something drop, and I turned and look, and from there, the fire got out of control. We tried to save the shop, but because the grille was locked, we could not get to it ... not even a pin we could not get to save,” said Russell.

According to reports from the Jamaica Fire Brigade (JFB), the blaze started about 10 a.m. at a cook shop on the premises. The cook shop, it is reported, was not in operation at the time.

Acting Superintendent of the St James Fire Department, Winsome Grant, reported that all three of the burnt-out shops –the cook shop, a clothing store, and a storeroom – were made of flammable material: plywood.

“Plus, there was partial damage to a section of the roof of the main building, which was made of concrete with zinc roofing. One stall and seven hand carts were partially destroyed,” Grant added.

In the meantime, JFB District Officer O’Neil Kerr said it was too soon to determine exactly how the fire started. The vendors believe it was accidental.

That rehabilitative work was to include roof repair and the overhaul of several stalls as well as to address other concerns such as security and sanitation.