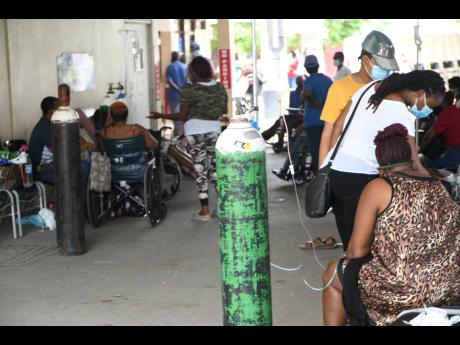 File
Patients on oxygen sitting in the undercroft of the University Hospital of the West Indies on August 23, 2021. Nearly five months later and even after the construction of a field hospital, patients have had to be tended to outside because of overcrowded wards.

The Jamaica Medical Doctors’ Association (JMDA) is pushing for scaled-down operations in hospitals across the island as hundreds of its members fall ill to the coronavirus, a sign that the public-health system may be on the verge of collapse.

President of the Jamaica Manufacturers and Exporters Association (JMEA), John Mahfood, has also warned that Prime Minister Andrew Holness was “out of line” in closing the door on the possibility of lockdowns.

Jamaica on Saturday recorded its highest number of daily COVID-19 infections, with 1,968 people testing positive. There were eight COVID-19 related deaths, including a one-year-old girl.

Up to Friday, 31 doctors operating within the Western Regional Health Authority had contracted the virus and were off duty, while 76 nurses were out infected.

A week ago, the South East Regional Health Authority had indicated that 242 healthcare workers had been infected with the virus, including 31 doctors from Spanish Town Hospital in St Catherine.

In a Gleaner interview on Sunday, JMDA President Dr Mindi Fitz-Henley said that there has been no islandwide directive from the Ministry of Health and Wellness for the curtailment of services with the large number of healthcare workers affected.

“What we need now are the clinical directors and managers and senior medical officers to come together and say, when they crunch the numbers, it’s just not possible. We have to have a scaling back of the things that are being offered in the different health centres and hospitals.”

But Holness has maintained his stance that his administration will not implement new measures to halt the fourth wave, fuelled, it is theorised, largely by the highly contagious Omicron variant.

The country’s positivity rate topped 68 per cent on Thursday, the highest registered since the beginning of the pandemic. Hospitalisations, as at Saturday, stood at 446. Eighty-seven people were moderately ill, 41 severely ill, and seven designated critical.

Asked if he was sticking to his position of no new containment measures amid the alarming surge, the prime minister answered in the affirmative.

Two Sundays ago, Holness told journalists at a press conference that Jamaicans who become infected with the virus must take responsibility.

“Go and get vaccinated. Argument done!” he said, noting then that that was the Government’s strategy in terms of navigating the fourth wave.

He has also maintained that there will be no more lockdowns to contain the spread, telling Parliament on Tuesday that the current measures would be extended for two additional weeks as Cabinet mulls economic recovery.

But Mahfood cautioned that the declarative refusal never to reinstall speed bumps to the virus could facilitate the spread and damage the very economy the Government said it sought to protect.

“He can’t say that without knowing for sure what is going to happen with the rise in cases, with the overrun of hospitals and in time, with impact on tourism, which we know is already being impacted,” said Mahfood in a Gleaner interview on Sunday.

He stressed that if cases continue to rise, the tourism industry may decline “dramatically”, with wider repercussions for the economy.

“So you know, it’s one thing to say we’re not having lockdowns and further curfews because of the economy, but it is the same reason the economy will be devastated if this thing gets out of control,” said Mahfood.

He said the Government should mandate COVID-19 vaccination for public-sector workers, a decision Holness told the Lower House will have to come. No timeline has been given for commencement.

President of the Jamaica Chamber of Commerce, Ian Neita, too, called for the mandatory vaccination of public-sector workers but homed in on healthcare workers.

“We share the concern of Jamaicans on the whole about the rapid spread of this new wave. It’s concerning to all of us, and we are feeling the effects of it right now in the business places,” said Neita.

He pointed out that productivity has suffered a blow, reporting that several businesses are operating with reduced staff because of the increase in cases.

“We think something needs to be done. Now, as to whether the prime minister should resile from his position he took [two Sundays ago], we still think it’s too early for that,” he said.

“Last week we said we welcomed the new message that the prime minister telegraphed to the business community. What it does for us, it signals confidence in our ability to navigate into the new norm.”

Neita said widespread and affordable testing will be critical to containing the surge. He said early detection will allow those infected to remain isolated at home and not infect colleagues in the workplace.