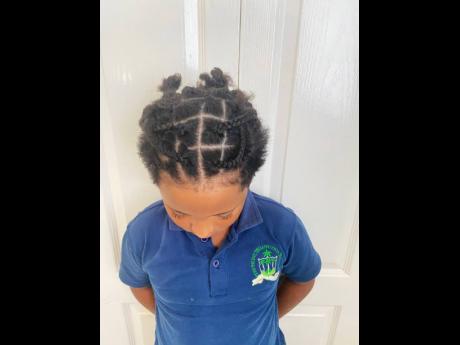 Contributed
Kimeisha Brown Martinez claims her eight-year-old son is being denied access to face-to-face classes at the Heinz Simonitsch School in St James because of his hairstyle. The school, however, said it is due to her refusal to let him wear a mask as mandated.

WESTERN BUREAU: The Heinz Simonitsch School in Rose Hall, St James, is rejecting discrimination claims by the mother of an eight-year-old boy, who is in the transitional phase of growing his dreadlocks in sync with his religion, that he was being...

The Heinz Simonitsch School in Rose Hall, St James, is rejecting discrimination claims by the mother of an eight-year-old boy, who is in the transitional phase of growing his dreadlocks in sync with his religion, that he was being denied access to face-to-face classes because of his hairstyle. Instead, it has said that it is his refusal to comply with COVID-19 guidelines which is at the root of the dispute.

Kimeisha Brown Martinez says she and her half-Jamaican, half-Spanish son, who attended the institution up to last Monday, are members of the Ethiopian Orthodox Tewahedo Faith.

The child’s father, however, said that his son has admitted to being a Christian.

The school says the issue is mask-wearing, vaccine testing and vaccination, which were laid out in a threat to the school by the mother, who warned she would file a lawsuit the minimum of $100 million if her son was ever tested or administered a COVID-19 vaccine at the institution.

In a letter to the institution, Brown Martinez declared that she would only comply with the school’s order for her child to be tested and vaccinated under a series of conditions, including that the institution provides documented scientific evidence that the COVID-19 virus, with all its associated variants, poses a clear and imminent danger to her son and others. In addition, it should convince her that the vaccines militate against the COVID-19 virus and all its associated variants and have been proven scientifically to be safe and effective with no potential for harm.

Children under 12 years old in Jamaica are not yet being vaccinated; however, orders made under the Disaster Risk Management Act (DRMA) dictate the wearing of masks in all schools.

Brown Martinez has since moved her son to a STEM academy, where he is enrolled in online classes.

The child’s father, who asked for his name not to be published, yesterday admitted that during a meeting he had with the school, an option was maintained for his son to continue classes at Heinz Simonitsch, once he wears a mask.

Principal Tamar McKenzie also said that no student has been barred or expelled or restricted based on hair or religious status.

The private school on the outskirts of Montego Bay is home to a diverse group of students from different ethnic backgrounds.

McKenzie argued that Brown Martinez signed the school’s handbook and accepted the rules of the institution when the child was enrolled in 2017, but on Sunday, January 9, she sent an email saying that her child would not – and should not be asked to – wear a mask.

“It was further stated that the school would be held liable in the sum of J$100 million should this occur,” according to the principal, adding that the school then contacted Brown Martinez, asking her to meet with them, but she declined.

“We responded to state that we cannot accept these new terms. We offered our online option so that he could observe his religious beliefs regarding the mask-wearing and also continue with his classes. Her refusal of this offer initiated our offer for refund as she stated he would not continue.”

Brown Martinez admits to sending the letter regarding his exemption to the school a day late, but insisted that her son was put out because she had sent him with plaits and braids.

“One hour after dropping him off, the teacher called me to come and pick up my son from school. I asked what was the reason; she stated because of his hair. I then responded that I sent the email they have requested for him to attend school. She said, ‘OK, let me check’,” said Brown Martinez.

The mom said that 30 minutes later, she received another call, telling her to pick her son, as he would not be accepted in school with his hairstyle, but advising that he could continue online classes.

Upon arrival at the school, Brown Martinez said that she saw him waiting in the lobby.

She said the principal told her that the exemption letter she had penned would not be accepted.

Late Monday afternoon, the school sent out a statement, noting that the mask mandate was a requirement under the DRMA, which everyone has to observe including students.

“The family was offered the option of continuing online so that their religious beliefs of not wearing a mask would not be violated. This offer was refused and the child withdrawn. There was no expulsion based on hair. In fact, expulsion was never contemplated or discussed. Our school embraces all religions without exception,” the school said.