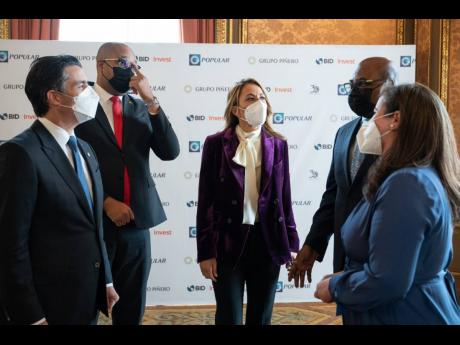 Tourism Minister Edmund Bartlett is planning to establish a committee headed by Chukka Caribbean’s John Byles to look at restructuring the debt of the sector, which he has said is huge due to the ravages of the COVID-19 pandemic.

“We have been burning dollars. It is one year that the businesses were locked down and no tourists came; and during the second year when the tourists started to come, we are still 54 per cent below 2019,” he told The Gleaner from the FITUR trade show now on in Spain.

He noted that institutions such as the Inter-American Development Bank (IDB) would be key to recovery, adding that many of the large hotels were having issues financing their loans.

“... We need IDB to come into play with the banks in Jamaica to help to rescue some of the small hotels, who are dying, while struggling to repay their loan,” he stated.

He was speaking in the wake of the IDB approving a US$200 million investment for Grupo Pinero – owners of Jamaica’s largest resort, the Bahia Principe in St Ann – through what Bartlett described as a strategic alliance between the development bank’s private sector arm, IDB Invest, and Banco Popular Dominican Republic.

Grupo Pinero’s hotel in St Ann and the Dominican Republic will benefit from the funding.

“The money is to restructure their debt arrangements and also to build sustainable activities with communities, with environmental issues and, of course, expansion of their plant,” Bartlett told The Gleaner.

The implications, Bartlett explained, were not good for stakeholders, who have taken out loans to establish their plant and create opportunities for expansion.

Although the cruise-shipping numbers are yet to be released, indications are that Jamaica’s overall numbers for 2021 were below, with many cruise lines cancelling calls owing to virus outbreaks on board.

Bartlett said he was able to start the conversation with the IDB Invest’s chief investment officer, Gema Sacristán, while in Spain. He said that she indicated that the Caribbean and Latin America are on the IDB’s radar for tourism support.

“So we’re going to be pursuing that when I get back to Jamaica because we have to find a mechanism to enable the industry to recover smoothly,” the minister said.

Last Friday, the IDB launched the ‘Future Tourism Program’, making a call to all tourist destinations in the region to accelerate their technological transformation, which it said is the key tool for the recovery and competitiveness of the industry.

With financing from the General Cooperation Fund of Spain at the IDB, the program is inviting destinations to benefit from a diagnosis of their level of technological maturity to develop a detailed action plan and pre-investment agreement with public- and private-sector stakeholders.

Latin America and the Caribbean is one of the regions where the tourism sector has had the greatest expansion, generating 10 per cent of the gross domestic product (GDP) and nine per cent of employment in 2019, according to data from the World Travel and Tourism Council.

“However, the crisis generated by COVID-19 has affected the sector notably, producing a 50 per cent contraction of regional tourism GDP in 2020,” said the IDB.