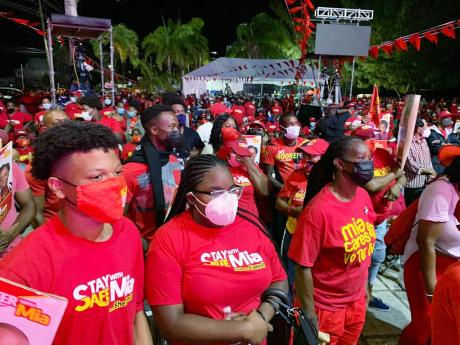 IT WILL BE a general election like never before today as Barbadians determine their path of governance for the next five years.

The polls will be held amid a wave of COVID-19 infections in a once-in-a-century pandemic that has marooned about 5,700 people in isolation up to Monday who are prohibited from casting their ballots.

On Tuesday night, a court threw out a last-minute challenge to stop the poll. It had been brought by candidate Philip Nathanial Catlyn of the Barbados Sovereignty Party.

Justice Cicely Chase’s ruling paved the way for the election to take place after Catlyn, who is running in St Thomas, sought a restraining order against the holding of the election until “the disenfranchisement of thousands of electors who are in quarantine due to the zoonotic COVID-19 viral pandemic is resolved beforehand”.

The election’s collision with a coronavirus surge has been a major talking point in the campaign, with Democratic Labour Party (DLP) President Verla De Peiza and head of the coalition Alliance Party for Progress (APP), Bishop Joseph Atherley, criticising Mia Amor Mottley, prime minister and leader of the ruling Barbados Labour Party (BLP), over her decision to call a snap election.

Meanwhile, the Electoral and Boundaries Commission (EBC) has revealed the last voters’ list review showed just over 266,000 people who are eligible to cast a ballot today.

The day’s proceedings will see more than 3,700 specially trained EBC staff manning numerous polling stations, most of which have been increased in size to allow for physical distancing.

Assistant Supervisor of Elections Roslyn Springer said all systems were go for the poll, which will involve 108 candidates.

The major parties, the BLP and DLP, are each fielding a full slate of 30 candidates, while the APP will be seeking 20 seats.

Chairman of the EBC, Leslie Haynesm QC, warned on Monday that electoral bottlenecks could lead to later-than-usual results being made public tonight. Unemployed people have been urged to vote early, thus allowing workers to fill out most afternoon and evening slots at polling stations.

“The campaign went to plan and we have everything in place,” Harris said.

De Peiza, too, was happy with the last two weeks of work.

“We ran a ground game and have been at it for about two years. We are quietly confident that we have done enough to satisfy Barbados that we are equal to the task of governance. The on-the-day game will matter and we must be sharp,” she said on Tuesday.