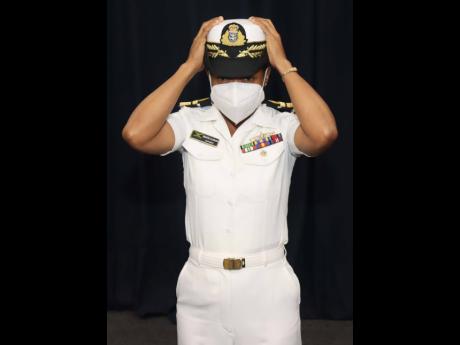 Contributed
Rear Admiral Antonette Wemyss-Gorman suits up as she takes charge of the Jamaican army on Thursday. 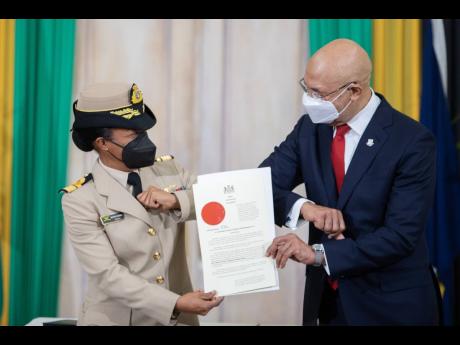 Contributed
Commodore Antonette Wemyss-Gorman (left) is presented with the instrument of appointment by Governor General Sir Patrick Allen at the swearing-in ceremony held at King's House on Thursday. Wemyss-Gorman, who has assumed the title rear admiral, will serve as Jamaica's first female chief of defence staff.
1
2

Dismissing sporadic calls for the disbandment of the army, Rear Admiral Antonette Wemyss Gorman has described the Jamaica Defence Force (JDF) as the backbone of the State and the axis of major disaster-response operations, including the coronavirus...

Dismissing sporadic calls for the disbandment of the army, Rear Admiral Antonette Wemyss Gorman has described the Jamaica Defence Force (JDF) as the backbone of the State and the axis of major disaster-response operations, including the coronavirus pandemic.

The chief of defence staff (CDS), who replaced retiring Lieutenant General Rocky Meade when she was sworn in at King's House on Thursday, was swift to point out in a day-earlier Gleaner interview that there are misconceptions about the military's role.

Weymss Gorman contends that while the most visible function of the JDF is internal security in confronting violent crime, its service members have an expansive mandate.

“The JDF is Jamaica's insurance policy,” the 49-year-old career officer asserted from her desk at Up Park Camp.

The army chief poured cold water on notions that the JDF exists primarily to defend the country's borders against external threats, declaring that its role encompasses nation-building, disaster relief, maritime domain, counterterrorism, and cybersecurity, among other things.

Wemyss Gorman also suggested that it should not be lost on those wanting to see the back of the army that it has “consistently ranked in the top five organisations that people trust in Jamaica”.

That index contrasts with confidence in other arms of the State, with the police and politicians ranking poorly in some local and international surveys.

Such has been the army's popularity that 65 per cent of Jamaicans said they would tolerate a military coup if the takeover was to suppress crime, a Vanderbilt University 2018-19 survey on attitudes to democracy in Latin America and the Caribbean showed. More than 58 per cent would support a putsch to curb corruption.

Those were the highest levels of support for a possible removal of civilian government in the 18 countries surveyed.

The Andrew Holness administration has increasingly called on the JDF in security operations to battle Jamaica's street and community violence that contributes to more than 40 murders per 100,000 people annually - among the highest in the world.

But the army's other mandates, she said, are “indispensable to the citizens of Jamaica”.

Pointing to the JDF's responsibility for the country's air and maritime space, said to be 25 times its landmass, the rear admiral said that there is no other local agency capable of offering that kind of protection of the blue economy. The JDF is also viewed, she said, as the go-to agency tasked with supporting every other government entity.

Wemyss Gorman said Jamaicans critical of the army need not look further than the coronavirus pandemic, with skyrocketing infections bedevilling the country in the current fourth wave.

“When I sat in this office and heard the news of the first case in China. I immediately stopped everything I was doing and started planning for [the virus'] arrival in Jamaica. I want to guess that that was well before any other agency,” Wemyss Gorman told The Gleaner, adding that the liberties of soldiers were restricted to prepare them for the potential rise in cases.

She warned Jamaicans not to downplay responsibilities for casualty and medical evacuations as well as search-and-rescue missions, including compromised cruise ships.

“If we are not able to say to the international community that we have the capacity to conduct search and rescue or respond to a downed aircraft, the industries go down in categories and ratings,” the rear admiral said.

The history-making first female army chief pledged that the JDF would remain decisive, firm, and strategic under her leadership.

The CDS was supported by Holness, who noted in Thursday's swearing-in that her pioneering efforts in the military have afforded her a combination of skills, experience, commitment, and strategic vision to lead the JDF.

The prime minister said he was looking forward to benefiting from her wise counsel on matters on defence and security, adding that Wemyss Gorman brings a unique perspective to discussions and efforts to strengthen the country's borders and prevent illicit inflows.

“I am confident that under Rear Admiral Wemyss Gorman's leadership, the JDF will continue to grow from strength to strength. It will also continue along its path of transformation and capacity development as it positions itself to more effectively and efficiently combat current and future threats impacting Jamaica,” Holness remarked.