‘It’s time we know our future’

No end in sight to job pains for agitated VTDI, NCTVET staff 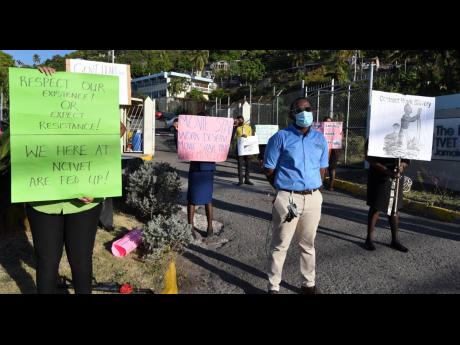 Ian Allen/Photographer
Disgruntled staff of the National Council on Technical, Vocational Education and Training and the Vocational Training Development Institute protest over unresolved issues relating to their employment at the gate of the Gordon Town Road, St Andrew-based campus yesterday.

Maureen Dwyer, acting permanent secretary in the Ministry of Education and Youth, has acknowledged the concerns of disgruntled staff of the Vocational Training Development Institute (VTDI) but said that she could not give a timeline for their...

Maureen Dwyer, acting permanent secretary in the Ministry of Education and Youth, has acknowledged the concerns of disgruntled staff of the Vocational Training Development Institute (VTDI) but said that she could not give a timeline for their grouses to be addressed.

After months of pleading with the Government to iron out issues pertaining to their employment statuses, the staff’s frustration boiled over yesterday as they blocked the entrance of the St Andrew-based institution to protest several contentious matters.

The main sticking point arose from the recent $313.7-million merger of the HEART Trust/NTA with the Jamaican Foundation for Lifelong Learning, the National Youth Service, and the Apprenticeship Board, which left the VTDI and the National Council on Technical and Vocational Education and Training (NCTVET) – which had previously operated under HEART but were later said to moved to the education ministry – in the cold.

Previous calls for dialogue as to their true status have gone unanswered, the staff said, and a sick-out last November to highlight their concerns did not result in a satisfactory resolution.

Yesterday, they complained that only 29 persons are on permanent contracts of the roughly 60 staff needed. In addition, persons have been acting in positions for several years without being confirmed, and a number of staff are set to retire shortly without pensions. All this was made worse by their in-limbo status without getting any official documentation to say whether they are still with HEART, which falls under Prime Minister Andrew Holness, or with the education ministry.

Dwyer, in an interview with The Gleaner, noted that there were many human resource (HR) issues which needed time to be resolved.

“In recent meetings, probably about a month ago, we had discussions with the management team, and we explained to them that the Cabinet submission is at the AG’s (Attorney General’s) Chambers for comments, so we have to get the legal work up and cleared. We have to get Cabinet’s permission to make any significant moves on the identity of the body of the school,” she said.

“The second thing is that ... we realised that there were several HR issues to be dealt with. Issues of staffing, inadequate staffing, and I think there was some issue relating to anomaly in their salaries and pay, so these are issues now that we have very quickly to attend to even as we wait for the Cabinet’s submission,” Dwyer said, adding that she could not say when the matters would be settled.

Yesterday, Carolyn O’Connor, acting head of the VTDI’s School of Applied Technology, noted the case of one staff member, who she said has been working on contracts for 19 years.

“Nineteen years and she is not a member of staff! She has been on contract for 19 years! She is so distressed!” O’Connor exclaimed, noting that the person has not received any benefits over the years and will resume her duties this school term on another three-month contract.

That staff member, O’Connor noted, could end up retiring without a pension if she is not given a permanent contract soon.

O’Connor, who herself has been in an acting role for the last six years, said that the educators want persons who have been acting for years to be confirmed in their posts and be paid accordingly.

She said that only two of 13 issues pointed out by staff were being addressed by HEART.

“I think it’s time we know our future. We are bleeding … . HEART cannot answer us. They have declared openly that they don’t know the answers for us,” O’Connor told The Gleaner.

“We are contributing significantly to the HEART Trust mandate, and we are being pressured every day to do things for HEART, and HEART is saying they are not responsible for us … . All they are responsible for is my pay. Nothing else,” one male educator complained.

One lecturer said it was “demoralising” to know that persons he has guided in their studies to attain degrees and diplomas at the institution then graduate and get jobs with better salaries than his.

“It’s difficult, to say the least,” he said.