Residents on tenterhooks after two killed in wake attack 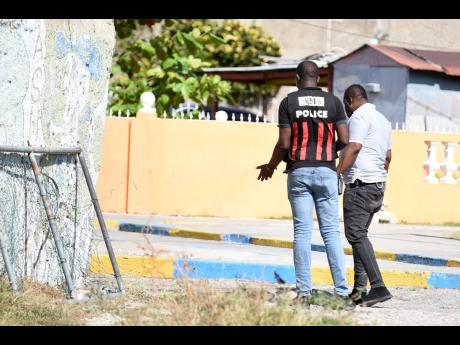 Kenyon Hemans/Photographer
Policemen are seen in the community of Dunkirk, east Kingston, on Saturday, after gunmen shot four persons, killing two, the evening before. The attackers targeted a wake.

A festering family feud has been cited as the trigger for the fatal shooting of two persons in Dunkirk, east Kingston, on Friday evening.

Two others were wounded in the incident, as gunmen reportedly targeted a wake about 7:45 p.m.

Most residents were reluctant to speak with journalists, fearing retribution from the gangsters whose reign of terror has included death threats.

At the core of the conflict, residents said, were two families whose appetite for violence has caused some parents to mull moving with their children.

The two deceased persons have been identified as 40-year-old Trevor Campbell of Bray Street, Kingston 16, and 22-year-old Tamika Harvey of McIntyre Villa. The wounded were hospitalised.

“I wish the pickney dem down here could a get a decent place to live and move out of this place,” said one resident who requested anonymity because of safety concerns.

“The young woman, she dead leave two pickney and she nuh involve inna nothing and dem kill her,” the resident said, referencing Harvey.

“If you see how her head mash up.”

According to the resident, two men who are well known in the community are behind most of the violence in the east Kingston community. Armed men reportedly move around with impunity, householders said.

“Dem nuh care. Dem just walk up on down on the corner with dem gun,” a resident whispered.

“Lord, this nah done now. A foolishness dem a go on with,” said another resident who described the killings as unbearable.

The community was blanketed by tension on Saturday, even as a strong detachment of police personnel patrolled the streets.

One cop, Constable Joel Robinson, delivered an impromptu sermon urging repentance and warning of the consequences of further unrest if the appeal was not heeded.

A small group of residents who gathered to listen to Robinson was receptive, acknowledging his on-the-spot sermon with Amens.

Kingston Eastern and Port Royal have been a long-time hub of gang violence.

Lawmaker Phillip Paulwell, an opposition member of parliament who has represented the constituency for decades, has sided with the Government in calling for states of emergency (SOEs) to be imposed.

His view was a departure from the Opposition People’s National Party’s, which contends that the police have other tools at their disposal.

“The decision by the party not to support the Government on the extension of the SOEs will hurt it in the future. The Government does not have a crime plan. So, since the SOEs are the only tools they have, at least in the interim, I believe they should have supported it,” Paulwell said in a Gleaner interview.

“My people in East Kingston want an end to murders. When their loved ones are dying without cause, you can’t tell them about principles.”