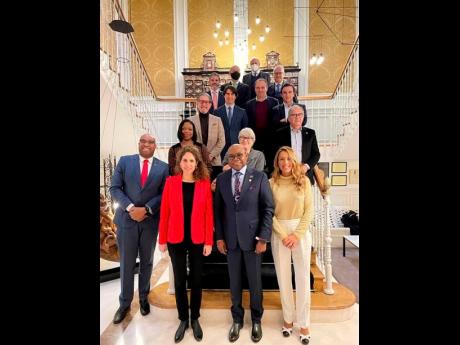 WESTERN BUREAU: Jamaica is experiencing its largest hotel and resort development boom in any single year, with 8,000 rooms, mainly European investor-led, under construction in varying stages. In an interview with The Gleaner from travel and tourism...

Jamaica is experiencing its largest hotel and resort development boom in any single year, with 8,000 rooms, mainly European investor-led, under construction in varying stages.

In an interview with The Gleaner from travel and tourism trade show FITUR in Spain, Minister of Tourism Edmund Bartlett revealed there will be a 1,000-room Viva Wyndham resort north of Negril, and a 700-room RIU in Trelawny.

Those developments will complement the previously announced Secrets resort in Richmond, St Ann, and the additional near 300-room Secrets in Montego Freeport.

And the boom does not stop there.

The 8,000 rooms being added to the inventory include the 1,000 rooms under construction by Jamaican-owned Sandals and Beaches in St Ann, the 2,000-room Princess Resort in Hanover, which will become Jamaica’s largest resort; and the Mexican Hard Rock Resort development that is expected to carry at least three other hotel brands.

There is also to be massive expansion of Bahia Principe by owners Grupo Pinero out of Spain, but those details are yet to be disclosed.

The tourism minister, however, stressed that he is relying on the leadership of Prime Minister Andrew Holness to navigate the approximately US$2-billion investment, which is forecast to create at least 36,000 part-time and full-time jobs over the period.

Both Holness and Bartlett are booked to turn the handles on shovels during several ground-breaking ceremonies over the coming weeks and months.

Bartlett noted that, given the unprecedented scale of development, seamless coordination and multi-ministerial cooperation was essential.

“Tourism does not exist in isolation, as it is a supply-chain industry that spans multiple economic sectors, including construction, agriculture, manufacturing, finance, and transportation,” he told The Gleaner.

“As it stands now, we are looking at the need for at least 20,000 construction workers, multiple construction contractors, engineers, project managers, and many other professionals, to ensure these projects are executed in record time.”

Beyond that, he highlighted the need for training of thousands of tourism workers spanning management, cuisine, housekeeping, tours, and reception.

The tourism minister said he has already instructed the Jamaica Centre for Tourism Innovation (JCTI) within the Tourism Enhancement Fund (TEF) to ensure worker training and certification programmes are ramped up in full coordination with hoteliers who have committed to working closely with the Government on this score.

He was quick to point out that an all-hands-on-deck, joined-up government and private-sector approach was essential to successfully getting these investment projects completed in record time, while assuring that the developments were also in sync with environmental considerations and community cooperation.

Meanwhile, senior adviser and strategist Delano Seiveright, who was also in the meetings at FITUR, noted that the sector, though stymied by challenges associated with COVID-19, continues to enjoy the confidence of critical stakeholders locally and internationally.

Jamaica was recently boosted with three flights per week between Belgium, the Netherlands, and Montego Bay by TUI Belgium and TUI Netherlands, set to commence in April.

The Belgian and Dutch flights will bring to eight the number of flights per week between continental Europe and Jamaica. Four of these are operated between Frankfurt, Germany, and Montego Bay by German carriers Condor and Eurowings Discover.

“Further, we continue to have a once-weekly direct service between Zurich, Switzerland, and Montego Bay. We do not include the roughly 15 non-stop flights per week between the United Kingdom and Jamaica, operated by Virgin Atlantic, British Airways and TUI in this assessment,” he said.

Additionally, by June, JetBlue is moving to increase to nine the number of daily non-stop flights with New York’s John F. Kennedy International Airport. This runs counter to JetBlue’s recent decision to cut a dozen and a half routes primarily across the Caribbean and Latin America.