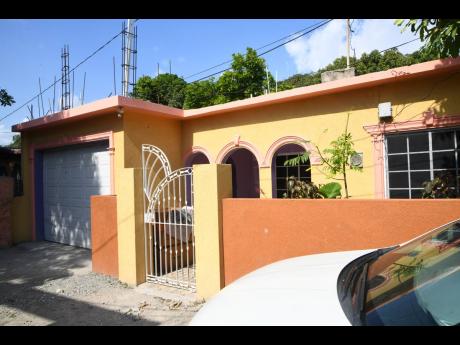 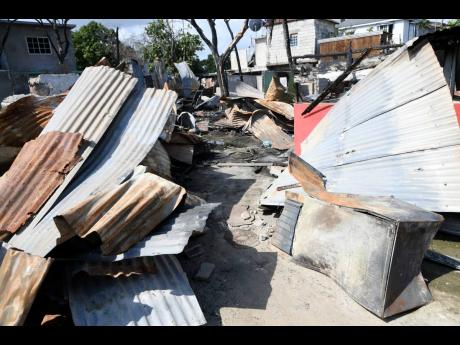 Rudolph Brown/Photographer
Gunmen burned down houses on White Lane after learning of a CCTV recording of a murder in Naggo Head, Portmore.
1
2

The police are combing through social-media exchanges, including voice notes with death threats, as they seek to snare players in feuding factions with connections in Naggo Head and the United States amid a surge in criminal violence in the...

The police are combing through social-media exchanges, including voice notes with death threats, as they seek to snare players in feuding factions with connections in Naggo Head and the United States amid a surge in criminal violence in the Portmore community.

Sharon Ricketts, a 66-year-old vendor of Cassinor Drive, is the latest victim of the spiralling violence in Naggo Head.

She was shot dead inside her home on Friday about 7:45 p.m.

Another man was shot and injured after men with high-powered guns stormed Pathway Three.

Ricketts, according to residents, has at least two sons: a policeman and another who resides overseas.

A senior policeman with knowledge of the investigation said that sleuths are assessing the theory that the latest tragedy stems from an internet war of words and is directly linked to the spate of murders, shooting and arson attacks over the past several months.

“We have seen and heard it and we are looking at everything and we invite persons who believe they know what is happening to come in and speak with the police,” the senior cop, who requested anonymity because he was not authorised to discuss the investigation publicly, told The Gleaner.

“It cannot continue. Several persons have either died or have been displaced because of these acts of violence.”

In the last week of December, 16 persons who reside at White Lane were left homeless following two separate acts by arsonists.

A technician, Keran McCollin, 39, who was reportedly warned by gangsters to remove a surveillance camera from his house, was murdered on White Lane on October 30.

That house was slightly damaged in the December blaze.

Douglas and two other men, all armed with handguns, had approached McCollin and opened gunfire, hitting him.

That murder was captured on CCTV from a neighbouring building. That house was set ablaze in December.

Residents of Cassinor Drive told The Gleaner on Sunday that they were weary of the wave of gun violence and arson.

They directed our news team to a home that was destroyed by fire after the female occupant was killed.

“As dem kill, dem burn down, so families have to move out. One of the wickedest thing you can do to someone is burn down dem house,” a resident, requesting anonymity, said.

“A just prayer a hold we, just prayer! About two months now dem kill Kerry and burn down her house.”

The neighbour said the deceased woman’s family was forced to leave the community.

“Her family lift up. If dem never lift up, probably dem woulda dead,” the resident said.

That scorched property, filled with charred zinc and other debris, is on Pathway Four and sits directly behind Ricketts’ house on Pathway Three, the site of Friday’s murder.

The residents said the killings have affected the psyche.

One householder who has lived in the community for more than a decade said she continues to be jolted by the appearance of police caution tape.

The Naggo Head Church of God of Prophecy held a community walk-through on Sunday, encouraging the residents to bring an end to the violence.

Senior Superintendent Christopher Phillips, commander of the St Catherine South Police Division, could not be reached as several calls to his cell phone went unanswered on Sunday.

The division has seen a 100 per cent increase in murders year-on-year up to January 20.

Eight persons have been killed compared to four for the corresponding period in 2021.

Shootings have also been on the rise, with four more being registered than the three recorded the period under review in 2021.