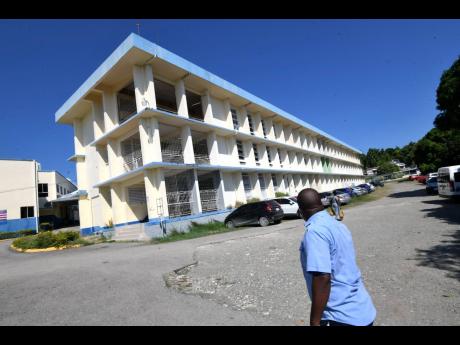 Rudolph Brown/Photographer
A man looks at a three-storey building at the Princess Margaret Hospital in Morant Bay, St Thomas, from which a 61-year-old man reportedly jumped to his death yesterday morning.

A young man remains unconscious in a Corporate Area hospital since early Sunday morning after he leapt from a building in Stony Hill, St Andrew, suffering head and other serious injuries. The man, who is believed to be in his early 20s, was...

A young man remains unconscious in a Corporate Area hospital since early Sunday morning after he leapt from a building in Stony Hill, St Andrew, suffering head and other serious injuries.

The man, who is believed to be in his early 20s, was reportedly at an event when he climbed the roof of a three-storey premises and crashed to the ground after threatening to jump.

The incident occurred about midnight, sending patrons, some of who were also injured from the fall, screaming and scampering for cover.

Eyewitnesses said that he was presumed dead, lying in blood, but concerned patrons rushed him to hospital.

A relative told The Gleaner on Monday that the injured man was still unresponsive.

Friends of the suicidal man said they had noticed troubling behavioural changes recently.

“We don’t know what happen. Him jus’ start move a way from the other day. We try talk to him, and this weh him do surprise me and a lot of people. We just wanted the best for him,” a friend, who requested anonymity, said.

The Stony Hill police told The Gleaner that they are aware of the incident.

In a reported suicide on Monday, 61-year-old businessman Surrano Warren of a St Thomas address leaped to his death at the Princess Margret Hospital.

The Gleaner understands that Warren was hospitalised after drinking a poisonous substance.

It is reported that about 2 a.m., Warren was seen climbing through a third-floor window.

Hospital staff reportedly failed in their attempts to stop him.

Warren was later found on the ground and was pronounced dead.

“We are in the process of doing our investigation. The matter has been reported to the Morant Bay police and I know they will be carrying out their investigation as well. It’s really an unfortunate situation,” Linton said.

The hospital said based on its confidentiality policy, no details on patient management could be disclosed.

“Based on the outcome of the investigation, I would be better able to say how we proceed,” Linton said, adding that Warren was admitted there on Sunday.

Warren is the second patient to have jumped from a Princess Margaret’s third floor with deadly consequences.

In November 2020, Welton Thomas, 41, succumbed to injuries he sustained after what turned out to be a fatal jump.

On January 9 this year, another businessman, Donald Anthony Thompson, 70, was found by relatives hanging from a rope at the back of his Kirkland Close home in Red Hills, St Andrew.

Mounting back taxes and health issues are suspected to have driven him to have committed suicide, his wife, Paulette Thompson, told The Gleaner then.

Also in January, a Corporate Area barber was reportedly rescued from the brink of death after he attempted to hang himself.

Suicidologist and founder of Choose Life International, Dr Donovan Thomas, said he cannot give statistics to say there have been significant increases in suicide but now is a time for us as a nation to show great concerns as there is greater vulnerability.

“Given the signs of the times, the impact of COVID and so forth, more isolation, more relationship challenges, sometimes the financial downturn, that is impacting the mental health of our people,” Thomas told The Gleaner.

Thomas has warned families and friends to be on the lookout of suicidal signs.

Every threat, said the suicidologist, must be taken seriously - whether they are overt or subtle.

“What are people saying, those expressions from their lips must be taken seriously. Sometimes they have negative views of themselves and they verbalise that: I am no good, I am rotten, I am the worst thing that a man could pick up called wife,” he said, citing some warning signs.

He recommends that persons in anguish reach out to others for help and not to leave persons with suicidal ideation out of sight.

Tools to assess suicide risk, the PINS SCALE and helpline

P – Plan: The more detailed the plan is, the closer the person is to the suicide act.

I – Intensity of the method: The more drastic the method, the more likely the person is to complete the act.

S – Support system: Provide as much support and reassure the person that they are important.