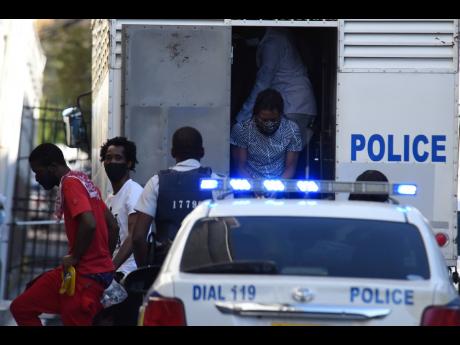 Kenyon Hemans/Photographer
Alleged members of the One Don Gang arrive at the Supreme Court building on January 24.

The woman who lost her life brutally in St Catherine in 2017 in a murder-arson was reportedly visiting her lover for the first time when gangsters allegedly aligned to the Clansman-One Don Gang kicked open the door and sprayed them with bullets before setting the house ablaze.

The revelation was made on Wednesday by a female relative of the male victim during her gripping and animated testimony in the Home Circuit Court.

The victims, who were burnt beyond recognition and found huddled together in the rubble, were identified on Wednesday by their relatives as 27-year-old Cedella Walder and 25-year-old Jermaine Bryan.

The court previously heard that the couple was murdered by alleged One Don Gang leader Andre ‘Blackman’ Bryan and his bodyguard, Tareek James.

The two were reportedly among two large groups of gangsters who went to the New Nursery community in Twickenham Park on September 8 in the wee hours of the morning in search of a man called ‘Bobo Spark’, an alleged sharpshooter for Tesha Miller, the reputed leader of the Clansman Gang, from which the One Don Gang emerged.

The witness, who recounted what had happened on the night when the gangster invaded the community, told the court that at first, she did not know who the female victim was but later discovered that she was ‘Chrissy’, who she knew as a child.

The woman told the court that none of her family members knew at the time that Walder was involved in a relationship with Jermaine Bryan.

“Is the first time she visit,” the witness said, noting that she last saw Chrissy about four years earlier.

She also told the court that when she went to the murder scene, persons there told her that Jermaine Bryan had brought the woman home after he came in from work.

However, before the incident unfolded, the witness said she was in her bed about 3:30 a.m. when she heard dogs in the community barking excessively and assumed it was either the police or gangsters invading the community.

Shortly after, she said she heard a bang on Jermaine Bryan’s gate.

“As mi hear the door get kick, me hear gunshots,” she said, recalling that shots rang out for a while.

When asked how she knew it was gunfire, the witness quickly replied, “Mi hear gunshots every day.”

As the gunshots rained down, the woman said she climbed atop a table in her home and tried to look over into Jermaine Bryan’s yard and observed two men standing at the back of his fence with guns.

She told the court that one of the men was known to her as ‘Frazzle’, noting that she recognised his bearded face while remembering that she had seen him the Saturday before.

Also, she said he was born in the community before he moved to Jones Avenue in Spanish Town.

That man, she said, had a long gun which she recognised, as it was similar to a weapon that a man known as ‘Fugical’ used to parade in the community.

The other man, she said, had a handgun.

The witness said that after the gunfire subsided and the attackers left the community, she went outside and saw Bryan’s home on fire.

While running towards his house, the witness said she saw police personnel at her home and told them the incident happened at Bryan’s residence, but they left and did not go to the crime scene.

According to her, the board structure was already engulfed in flames. The fire brigade and other police were present.

Following the cooling-down exercise, she said: “After dem draw away piece o’ zinc, mi see the two piece o’ something dem. Mi nuh know if a body; everything burn off.

“The whole community come down and we look and dem see a likkle open piece a penis, and a so we know say a Jermaine,” she recalled.

She also testified that the community was once very peaceful before the gang rivalry started in 2004 between men from the community and those in Jones Avenue, which caused an exodus.

The witness, who is unable to continue her testimony today because of a previous engagement, will resume at a later date.

Andre Bryan and 32 other alleged gang members are being tried on an indictment with 25 counts under the Criminal Justice (Suppression of Criminal Organisations) Act and the Firearms Act.