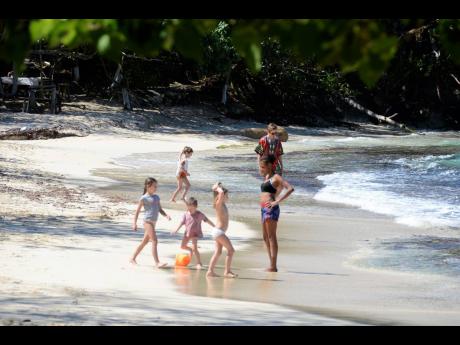 FAIRY HILL, Portland: The Portland police have confirmed that they have received reports that truckloads of white sand are being stolen in the dead of night from Winnifred Beach in east Portland. Commanding officer of the Portland police,...

The Portland police have confirmed that they have received reports that truckloads of white sand are being stolen in the dead of night from Winnifred Beach in east Portland.

Commanding officer of the Portland police, Superintendent Kenneth Chin, said that he is not privy to the details of the alleged theft but acknowledged receiving a letter seeking permission to stage a fundraising event for the installation of a gate to bar unauthorised access to the venue.

Chin said the police could not honour the request and referred the organisers to seek audience with the Office of the Prime Minister.

Sand theft has plagued Winnifred Beach for decades, said Nino Sciuto, coordinator of the venue, but, reportedly, has intensified since the coronavirus lockdowns and nightly curfews.

Sciuto disclosed that residents have reported seeing trucks parked on the beach at nights that were being loaded with white sand.

Tyre tracks spotted in the daytime are evidence of the late-night breaches, said the coordinator, arguing that the illicit activity could cause damage the coastline.

Sciuto said that the police are aware of the concerns but charged that the sand continues to be mined at alarming proportions because the lawmen have not caught any offenders.

Port Antonio Mayor Paul Thompson has called for the police to conduct a full investigation into the beach-theft claims and urged residents to provide information to the authorities.

“We cannot sit idly by and allow thieves to destroy our beautiful white-sand beach, which is also a major attraction for tourists and the local people. This corporation will be playing its part, and we are willing to lead the charge in pursuing this matter through intense investigation,” Thompson told The Gleaner.

Winnifred Beach is one of 11 beaches earmarked for major development.

The theft of sand from Jamaica’s public beaches is not new, with an estimated 500 truckloads removed from a Coral Spring property in Trelawny in 2008.

In the meantime, the National Environment and Planning Agency (NEPA) has acknowledged that it has received a complaint about illegal sand mining at Winnifred.

The agency, in responding to emailed queries by The Gleaner, said that personnel visited the location but did not discern observable breaches.

However, NEPA said that given the nature of the complaint, the agency is collaborating with local government partners, as well as the Urban Development Corporation (UDC) and non-governmental organisers, to have the beach continuously monitored.

NEPA said that the removal of sand, by way of erosion or otherwise, could threaten coastal resources and infrastructure. Breaches are prosecutable in Parish Courts, and convictions carry a maximum fine of $50,000 and/or a term of imprisonment.

There was no response to emails and phone calls to the UDC, which manages Winnifred Beach.