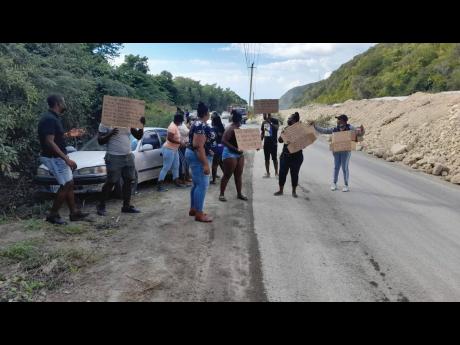 Photo by Shanna Monteith
Protesters line a section of the Grants Pen main road in St Thomas on Wednesday, the first day of a two-day demonstration. 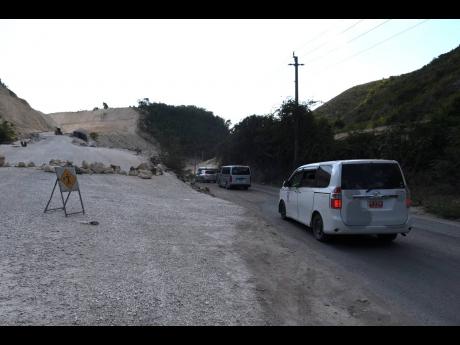 Kenyon Hemans/Photographer
Motorists drive past the South Coast Highway route that is expected to open soon. Residents of Grants Pen protested for two days against the longer route to leave the community, which they say is an inconvenience.
1
2

Residents of the western St Thomas community of Grants Pen have slammed the access route to the under-construction South Coast Highway as unviable, but the state agency tasked with the roll-out has rubbished the counterproposals as impractical.

The impasse exploded this week with a two-day protest that caused traffic to grind to a snarl before the police intervened.

At the nub of the conflict is the perceived long trip - of about a mile - to hail public transportation.

That is expected to frustrate business persons and cause inconvenience for routine movement for the elderly and other vulnerable householders.

Shelly-Ann Morgan, who owns and operates a bar in the community, has lamented the impending negative impacts to her livelihood.

“When them block off the traffic, how we that do business going to manage to pay our bills and rent? You think the trucks them going to turn off the highway and come back all the way around here just to deliver goods to me? It’s not fair to us,” she said, demanding the attention of the prime minister.

Residents of Grants Pen are livid that the Government appears resistant to reconsidering bypassing their community via the Southern Coastal Highway Improvement Project. But they insist that they will not relent protest action until their voices are heard.

The Gleaner understands that traffic will be diverted from the community in a week or so in order to continue work on a section of the roadway that is currently being used by motorists.

Communications manager at the National Works Agency (NWA), Stephen Shaw, confirmed that discussions have been ongoing with representatives of the community association and that further talks are scheduled for next Tuesday.

He cautioned, however, that plans that are currently being executed on the highway will not be aborted.

Shaw insists that there is no better alternative.

The exit and entrance to Grants Pen on the highway will be a signalised intersection and will have a layby and sidewalk for safety, he added.

“We have listened and explained to them why their suggestions of building a tunnel or another road from the highway to their community will not be able to work. It’s a seaside community and in front of it is a mountain.

“We are going through the mountain … a road from the highway to the community will be too steep of an elevation,” Shaw said.

But Morgan feels that efforts by community members to improve Grants Pen have been betrayed.

“We work hard to bring our community to this because back in the days we had a bad stigma, and now we build up, only for it to get cut off from the rest of the parish,” she told The Gleaner.

Fish vendor Hyacinth Coleman also foresees rough days ahead for her family if their pleas are not addressed.

“I go to sea and catch my fish and sell them on the roadside, and when dem cut we off, me can’t go get anybody to come and buy a pound of fish. I won’t be able to pay my rent or bills or send mi daughter to school,” she said.

Coleman also revealed that the stretch on which residents will be forced to walk to access areas outside of Grants Pen is crocodile territory.

“We fi send we children them to walk mile and half to get taxi so crocodile eat them? A foolishness dem a keep up pon we!” she said.