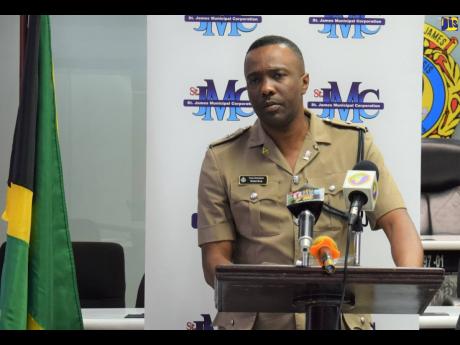 A 40-year-old reputed violence producer who pleaded guilty for his role in an $8-million heist in the upscale Westgate Hills community of Montego Bay in May 2020 will spend 15 years behind bars before being eligible for parole.

Serial robber Lucan O'Connor, of Flanker and Norwood, St James, pleaded guilty a month ago and was sentenced on Tuesday to 20 years' imprisonment for gun possession and 19 years for robbery with aggravation.

O'Connor was accused of robbing a Chinese national. Two of his alleged accomplices were shot and killed by the police in a reported firefight at an area in Green Pond.

Two guns were recovered at that scene and an undetermined sum of money, the police reported.

The case against O'Connor was strongly supported by DNA evidence and CCTV footage, the judge who presided concluded when the defendant appeared in the Western Regional Gun Court on Tuesday.

He was also found guilty in another matter and sentenced to 10 years for illegal possession of firearm and ammunition. His sentences will run concurrently.

According to court documents, O'Connor was arrested in February 2021 when he was found in possession of a firearm at his home in Middle Road, Norwood.

“When the robbery took place initially, the police did a tracking of the robbers. Another operation was conducted on the car that the perpetrators used. Forensic work showed O'Connor's involvement,” Ellis told The Gleaner Tuesday.

DNA also connected O'Connor to the weapon found at his home.

Ellis said that O'Connor, a notorious violence producer, had been previously detained under the state of emergency, which lapsed in August 2020.

“After his release, he committed that crime,” said the divisional chief, noting that O'Connor had been set free then owing to the absence of evidence at the time of his detention.

The police commander said he hopes that the case will mark a turning point in the justice system's determination to rescue Jamaica from a syndicate that featured in several shootings. He is confident that society will be safer with O'Connor behind bars.

Ellis has also urged law-abiding citizens to trust the system and not to resort to vigilante justice.

“It is my dream that his fellow colleague, who is awaiting his day in court, will receive double the sentence,” the senior cop said of a reputed accomplice of O'Connor's.

“He will not be missed in this parish.”