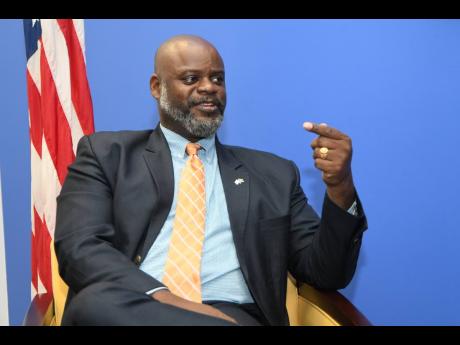 The ‘60/60 year’ is how the United States Agency for International Development (USAID) has dubbed its milestone anniversary, which coincides with Jamaica’s diamond Independence.

Over the past six decades, USAID has invested in excess of US$1.4 billion to support the environment, health, education, and citizen security in Jamaica.

In an interview with The Gleaner, USAID country representative Jason Fraser offered details of the agency’s impact and its outlook.

“Jamaica has a great platform, just like many other Caribbean countries do, to actually integrate more renewable energy into their power grid, and how we can help is to bring expertise from the United States to Jamaica and seek to make it more available to people at an affordable price,” he said.

Fraser said USAID alone has spent US$8.2 million on Jamaica’s COVID-19 response, and historically, millions of dollars have been allocated towards HIV/AIDS interventions.

“We have had programmes running through the Ministry of Health and Wellness, and we continue to partner with private-sector groups to administer care to, and bring in, more HIV/AIDS clients. We hope that we won’t have to be here for the next 20 years, particularly in the area of HIV/AIDS, and hopefully, the COVID-19 pandemic won’t last too many years,” Fraser said.

While USAID does not have a running education programme, its impact over the last 60 years has not gone unnoticed.

Through strategic literacy and numeracy programmes, the agency has reached more than one million Jamaican students from the basic to tertiary level.

During the period 2017 to 2021, USAID partnered with the Jamaica Association for the Deaf to formally create and introduce the Jamaican Sign Language Grammar curriculum, which led to significant gains in student literacy.

Agriculture is another key area USAID has financed over the years with the aim of boosting Jamaica’s rural economy.

“As the communities became urbanised, those programmes became less and less, but there is still a need to look at small producers. Our focus in the past has always been on how we can make sure that assets, whether they are tools, inputs like seeds and fertilisers, can actually be disseminated in a more equitable way to small-holder farmers but also looking at the way finance and banking institutions look at small-holder producers and what they produce as collateral for increased financing,” the country representative said.

Fraser said that COVID-19 has reshaped how USAID reaches people in all of its programmes. He shared that the agency has had a harder time hosting meetings and having engagements with vulnerable communities.

Since March 2020, the international development agency has invested close to US$18.5 million on non-pandemic-related initiatives.

The country representative said USAID’s aim is to engage in extensive consultation with a wide range of stakeholders, including the ordinary Jamaican, before any strategy is generated as programmes must match what Jamaicans want for themselves.

“Jamaica has laid that out in their Vision 2030 plan, so it is clear that this is the direction Jamaica wants to go - sustainable development, economic growth, better literacy and education for young people, reduced violence and crime, and a healthy population. When we put that all together, I think USAID is working in the right places,” Fraser said.

He added that Jamaica has most of the resources it needs to address its challenges but noted that the main constraint is financing.

Fraser, a son of the Caribbean, said it is fitting that his tenure with USAID will end in Jamaica, as 21 years ago when he began working as a development officer, his focus was on regional issues.

He said his biggest takeaway is the importance of listening to people and understanding their culture.

“All of that makes a big difference in how we approach problems. The intellectual and analytical perspectives that Jamaicans have of their own country, I don’t think that I’ve seen that better than here,” Fraser said.