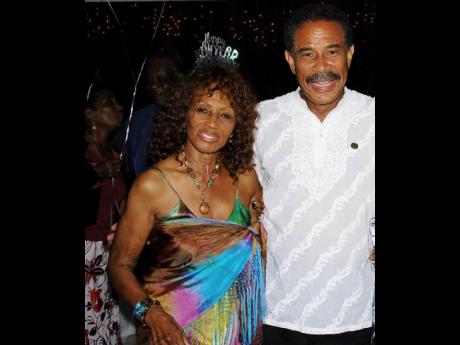 File
Dr Anthony Vendryes rings in the New Year with wife Dorothy at the Upper Deck in Montego Bay in 2008. Mrs Vendryes, who became widowed in 2019, passed away on Saturday.

One of Jamaica’s first black women to capitalise on the tourism industry, catering to the likes of Elizabeth Taylor, Lady Mountbatten, and Princess Margaret, has died.

Dorothy Vendryes, nee Gourzong, whose 1950s beauty salons catered to the rich and famous, died on Saturday in Canada, where she resided in Mississauga, Ontario, with her daughter.

During an interview with The Gleaner in 2017, Vendryes said in those days, she pushed the envelope, employing staff from the United States, France, the United Kingdom, and Canada, because her clientele were mainly wealthy visitors.

“Not that local beauticians were not employed to my salon. In fact, they were my right hand,” she said.

Vendryes, who was believed to be in her 90s, was married to physician and alternative medicine advocate Dr Anthony Vendryes, who predeceased her in May 2019. They had been married for 46 years.

With the money earned from the salons, she was able to buy land and build one of the first small hotels to be owned by a Jamaican woman. She opened the Royal Court, a 26-room resort in the early 1970s, building an additional four rooms afterwards.

Royal Court became one of Montego Bay’s most popular hotels.

“Persons borrowing money to invest in hotels then were referred to me for advice by the Jamaica Development Bank, that would give them loans,” Vendryes told The Gleaner in 2017.

The hotelier became president of the small hotels association and said there was a period when women were excelling in that aspect of the industry.

“We were fighters, we would fight for our rights. We became the backbone of the economy,” Vendryes stated during her last interview with The Gleaner.