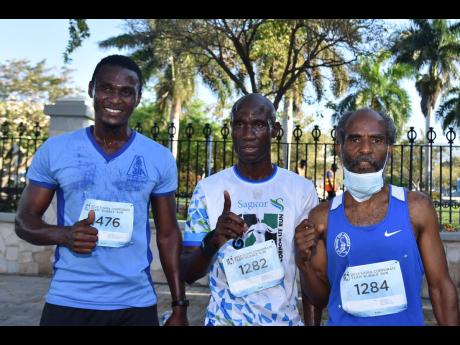 A fit, 50-year-old Richard Brown was the first participant to cross the finish line in the corporate ‘team bubble’ run at Sunday’s 24th staging of the Sagicor Sigma Corporate Run, the biggest road race in Jamaica since the coronavirus outbreak of March 2020.

Approximately 2,500 participants commenced the run in groups of up to 240 at a time, significantly lower than pre-pandemic years when the event attracted up to 27,000 people.

“Sigma has always been my most exciting event. I am a road race addict, and anywhere there’s a race, I am there,” he said, adding that he ran his first 5K race over a decade ago.

Though 5K events have not been held in the past two years because of the pandemic, he did not put training on pause.

“I was running just over six minutes per kilometre in my training, so this was another opportunity to challenge myself and see if I can get that time under six minutes,” Brown, a member of the Bank of Jamaica team, said in a Gleaner interview.

Angelika Wollenweber, who participated in the run for the first time, emerged as the top female participant with a time of 30:39.

Wollenweber, a German native, told The Gleaner that she has been in Jamaica for a year and six months.

“It was exciting. It was the first time in my life I’ve ever done something like this. I am glad I had a chance to participate and also happy that the company could join in a real bubble race and not have to stick to a virtual one,” the Jamaica infrastructure operator employee said.

Seventy-year-old Jayantha Bandara, a member of the MegaMart bubble, has participated in the annual charity run eight times.

“It was a really good race. We are really happy that they were able to get the run going this year. We are returning to normal, and next year, I hope that we will have 25,000 to 30,000 people like in previous years,” Bandara said.

The proceeds from this year’s staging, which also features a virtual run and an invitational race, will be handed over to Kingston Public Hospital (KPH).

Acting CEO of KPH, Dr Natalie Whylie, said that the funds will go towards the surgical and oncology departments.

She said that though the hospital is known for treating trauma cases, it provides urgent and elective surgical procedures.

Owing to the COVID-19 pandemic, many surgeries have been postponed.

“The provision of the equipment will go a long way in clearing our surgical backlog. The other thing that Sagicor has done is to build into the equipment donation a maintenance component. It will be a gift that continues to give,” Whylie said.

The acting CEO explained that KPH is the final referral centre for Jamaicans and members of the diaspora suffering from cancer.

“We are excited for the change that is coming, and we want to thank Sagicor Sigma and all of the corporate sponsors for coming on board,” Whylie remarked.

President and CEO of Sagicor Group Jamaica, Chris Zacca, said his organisation was “elated and over the moon” at the opportunity to host the race.

“This is a part of our DNA. Last year, we were unable to do an in-person run other than a few selected people. This year, we were able to move closer to normality and we are excited,” Zacca said.

“It is a big, big thing for us, and I think it is a big thing for Jamaica. So many people look forward to participating, and we just want to help Kingston Public Hospital in a big way this year.”

Since the start of the charity road race in the 1990s, more than $500 million has been donated to numerous beneficiaries with a focus on health, child-related and educational initiatives.