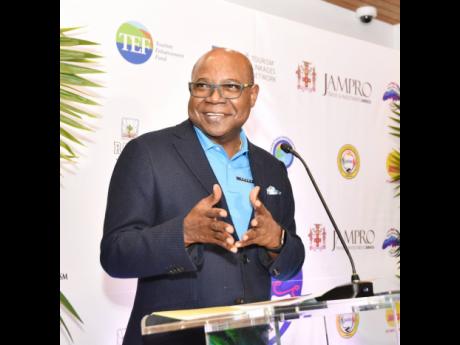 In the seven years that the Tourism Linkages Network (TLN) has existed, local producers of goods and services to the tourism industry have grossed $700 million through its Speed Networking event, says tourism minister Edmund Bartlett.

The event was created in 2016 to pair buyers with suppliers, boosting not only the consumption of local products, but also the economy.

Underscoring the importance of the event, Bartlett told the 110 registered sellers and the over 50 buyers who were in attendance at the Montego Bay Convention Centre venue on Thursday that the money generated was not by large players.

“It's the small people who sell condiments, art and crafts, and the basic little things that add value in a hotel situation that enhances the look and feel and enables a tourist to take a little piece of the treasures of Jamaica with them in their suitcase back home,” said the tourism minister.

For the second day, Bartlett used his platform to remind stakeholders in the industry that the trading environment was different from that of 2019, prior to the emergence of the COVID-19 pandemic, which brought the sector to a halt.

“In the last six or so months, there has been a resurgence and this return to activity is being challenged by the lack of resources coming from the period of the pause,” he pointed out.

He urged the participants to capitalise on the opportunities created by the slowdown in global trade and produce as much as they can locally.

Both men underscored the value of the Speed Networking event, with Reader stating that with more than 350,000 members and associates of the JHTA, there was a deliberate move to link tourism partners to ensure retention of the tourism dollar.

“It makes no sense when we announce billions being earned by tourism, but the greatest question is always, 'What is the multiplier effect?', and secondly, 'What is being retained in our local communities?',” argued Reader.

Reader stressed how critical it was to build a sustainable tourism sector for the development and the enrichment of the Jamaican people.

While Mahfood spoke of the quality of the product, noting that other business sectors in Jamaica could learn from the sector, in terms of developing products that are best in the world and offer best customer service.

Always batting for locally produced products, Mahfood cited the TLN Speed Networking as one means of reducing the over dependence on imported food items, stating that the key issue was importing too much.

He said it was time to leverage local manufacturers and help to reduce the production gap, adding that there was a need to achieve a sense of equilibrium between the level of imports and experts.

“The Tourism Linkages Speed Networking event characterises a movement towards the ideal of supporting local; this event provides a gateway for Jamaican companies to not only display their products and services, but more importantly develop partnerships with prospective buyers that will help to improve the outlook of their businesses in the coming years,” said the JMEA president.