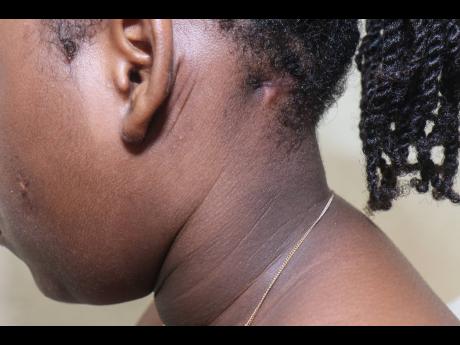 File
Eleven-year-old shows bullet wounds to her head and face.

“Is this how my life is going waste away? Is this where my future ends?”

Those are the painful reflections of 11-year-old Calyssa Walker, who was hit by a stray bullet during a gunfight as she travelled in a taxi along McCatty Street in Montego Bay in October 2021.

The preteen, who is an aspiring doctor, penned a tear-jerking letter to Prime Minister Andrew Holness last week asking for his intervention as her mother struggles to find US$60,000 for cochlear implant surgery in the United States.

Calyssa was one of four bystanders shot in the incident in which rifle-toting attackers engaged men in another car in a high-speed chase and shoot-out in the western city.

She now suffers from excruciating headaches, partial hearing loss, dizziness, imbalance, and has been absent from school since the incident.

Her letter, which she read on camera, is addressed to the health, national security, and education ministries as well as government agencies.

On Sunday morning, more than 47,000 people had viewed the viral video.

In between tears, the Corinaldi Avenue Primary student recounted the nightmare of being shot in the back of the head. The bullet exited through her left jaw. She spent a month admitted to Cornwall Regional Hospital.

“I suffered a fractured skull and I lost hearing in my left ear, and I wasn’t able to walk,” she said.

Calyssa is now walking on her own but said she is unable to do so for long periods.

Her mother, Kelly-Ann Reece, has received help from the St James Municipal Corporation to the tune of $250,000. Her principal, the Lay Magistrates’ Association, and the public have pitched in with contributions to her GoFundMe fundraiser, but the family is far off the target needed for her life to return to normality.

Doctors here have referred Reece, a single mother, to the RadyChildren’s Hospital in San Diego, California.

“My main reason for reaching out is that not even online classes I can participate in. Because when they are speaking and they speak loud, my head starts hurting. If I stand for too long, I get dizzy or tumble over,” she stated in the video.

Reece, who is haunted by memories of blood spewing from her daughter’s face after she was shot, says they have tried everything to finance the surgery, with the April 30 deadline fast approaching.

Unable to hold back the tears during the interview, Reece broke down several times, expressing concern about the grim diagnosis by local doctors that her conditions may worsen.

“The ENT specialists say if the surgery is not done on time, Calyssa could lose hearing in her right ear as well as due to the fact there is too much pressure on that one ear,” Reece disclosed.

“She is also having severe pain at the back of her head, which is believed to be caused by bullet fragments.”

Reece, who is also mom to a toddler, said she had to leave her front-desk job at a resort to take care of her daughter.

Calyssa has also not got an appointment at the US Embassy as yet, said Reece, as the only available date is in 2023.

It is not uncommon for the embassy to accommodate emergency cases, however.

The family is in dire straits said her mom because Calyssa needs to undergo an MRI and a CT scan before departing the island.

Calyssa’s father has not been in her life for years, said Reece.

Before being shot, the 11-year-old was among the brightest in her class.

Persons who wish to help the family may make donations to Scotiabank account #1006493 (J$) or US-dollar account #1012416, Montego Bay branch. The name on the account is Kelly-Ann Reece.