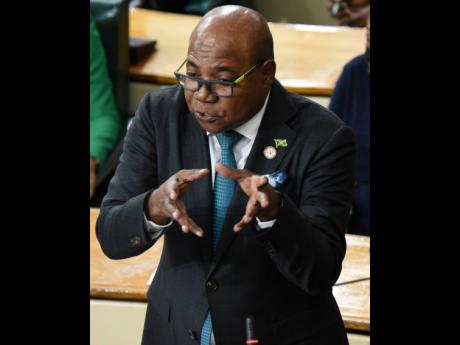 Ian Allen/Photographer
Edmund Bartlett, minister of tourism, delivers his address during the Sectoral Debate in the House of Representatives on Tuesday.

With 90 per cent of planned tourism investments on track, the construction industry will need 12,000 workers, multiple building contractors, engineers, project managers and a number of other specialists, the tourism minister has said.

Additionally, thousands of tourism workers must be trained in management, food and beverage, housekeeping, tour guiding, and reception to meet the anticipated demand in services with 8,500 new rooms expected to be built over the next decade.

At least 24,000 part-time and full-time jobs are being created from the investments, Edmund Bartlett said during his Sectoral Debate address in Parliament on Tuesday.

Among the resorts to be built is a Viva Wyndham Resort north of Negril. That hotel chain plans to build 1,000 rooms, while Princess Resort in Hanover, which will become Jamaica’s largest resort, will add 2,000 rooms to the sector.

Combined, the investments are projected to pump US$2 billion into the economy.

“This is a huge vote of confidence from our investors in Brand Jamaica,” Bartlett stated.

Emphasising the need for investor facilitation, the tourism minister said that his ministry is working closely with JAMPRO, the State’s investment agency, to develop a National Business Portal – a one-stop mechanism for applications for all relevant government licences and permits for projects. That initiative is expected to make the application process efficient and hassle-free.

“Investors will be able to log on to the digital platform and get regular updates regarding their application status. This ease of doing business will make Jamaica more attractive to investors, both local and international,” Bartlett said.

But even as the industry expands, Bartlett came short of warning tourism stakeholders of their role in providing a favourable work environment for employees.

“We need to treat the workers with the dignity that they deserve,” he stressed.

There have been historical grievances about the employment of foreigners, especially entertainers, by hotels, with locals arguing that local talent was being crowded out of the market.

Bartlett also announced a labour market study for the industry.

“Specifically, the study will outline the hiring arrangements, types of positions, salaries, benefits, and skill set/training requirements for various positions. It will also make recommendations for intervention by the Ministry of Tourism and its public bodies on how to address key issues, identify gaps, and create opportunities for growth and job creation in order to build a resilient labour force,” he said.

The study should be completed by December 2022 and will enable the Government to make data-driven decisions.